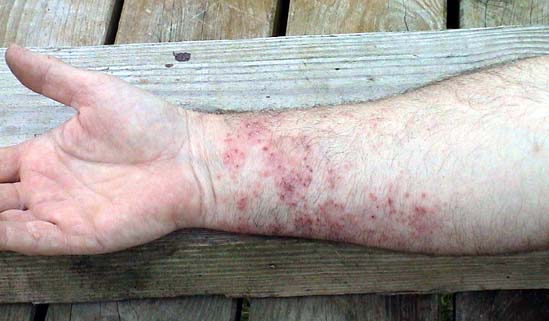 Is there anybody out there studying Dogger Bank Itch ?

I am, or should I say was, a Lobster fisherman in the Lands End area. After fishing for 25 years without a problem I've developed the allergy, diagnosed as Dogger Bank Itch by the Dermatologist. Of course I knew what the problem was because I'm the fifth person in this area to suffer from it. It starts as itching sores in the wrist area, which for the first couple of years subdue after a couple of days ashore. However, in my case, by the third year it seems that I had become sensitized such that a walk along the cliff with the wind off the sea was sufficient to keep the allergy active ....

I fish only inshore, from a beach launched punt, - out to one mile -. The itch is initially seasonal from late May until early August.

The only known treatments are
1) Retire
2) Imunosuppressent drugs.

I've taken option 1 but would be happy to help with anybody studying the problem.
Regards  John Chappell


In the UK 9 species have been identified in the Alcyonidiidae family with Alcyonidium diaphanum the most likely culprit for the 'Itch' and is sometimes referred to as Sea Chervil.  It is a pale brown (honey) colour, gelatinous, commonly around 150mm but can grown larger and variable in shape.  It is a common sublittoral species occasionally occurring in great numbers. It attaches itself to stones, shells etc and is easily removed (and due to its size presumably captured) by demersal trawls. This would therefore explain it comes into contact with fishermen. I cannot explain the seasonality of the itch but it could be associated with its summer growth period. Does anyone else have any ideas?
devonwt@cix.compulink.co.uk
Thanks for all the replies.
There are a number of mysteries surrounding this 'itch' which I should elaborate on.
All five men with the problem fished with pots for 25 years before showing any symptoms. There are a number who fish
in the same areas but have only been potting for 15 years or so.
(Prior to that they fished in the same waters but for mackerel)
My colleague who I moored alongside, handled his boat and fished alongside succombed at age 60 after fishing for 30 years and yet at that time I had only potted for 20 years and had no problem.

It seems this is a slowly aquired allergy but not a purely recent phenomena as the first person I knew of with the problem
succombed about 20 years ago.
The only people with the problem fish in the immediate coastal waters out to a mile or so. Crews of bigger boats fishing beyond 3 miles dont have the problem, although this could be because the crews tend to be younger so havn't fulfilled the 25 year requirement !
The dermatologist is also suspicious of the Sea Chervil and patch tests were positive when a sample was obtained.
However, our suspicion is that it is the 'slime' that accumulates on the buoy ropes is either responsible for, or at least acting as a trap, for the source of the problem.
The formation of the  brown 'slime' which I assume to be algae co-insides exactly with the late May onset of the itch.
In early August this slime gives way to a green weed growth which is when the 'itch' normally subsides. Having said that, the 'itch' persisted into September last year.

Once sensitivity has been established it seems that no amout of precautions have any useful effect.
Barrier creams, gloves, gauntlets, total body suits even including helmet and visor have no effect.
Regards to all  -  John Chappell

'Dogger bank itch' is caused by a bryozoan.

Dr. Ryland wrote the following to me several months ago.

"In the '60s a bryozoan in the North Sea was responsible for the "Dogger
Bank itch" which was a serious problem to trawlermen for a few years
(causing severe eczema, sensitization, and the eruption of rashes simply
by going on deck when the catch was brought in)."

Does anyone on this list know which species causes this skin disorder?

If the identification is right and it seems the most likely, the bryozoan,
a sessile animal (fouling organism to non-students), might actually spread
on the lobster pots and fishing gear. And if it as very old Lobster on the
crustacean itself. But these very large ones will not fit in the pots.

So it might be worth thinking about  examining, cleaning*, replacing the
fishing equipment to reduce and significantly minimise the risk.  Bryozoans
reproduce asexually so it is not planktonic settling, so by removing the
existing growths you may stand a sporting chance of keeping the rash and
itching within bearable bounds.  (*taking the pots of the water would be
the first step and thereby killing the growths.)

Some species of Alcyonidum are found intertidally on seaweeds. However, I
have not attributed the small rashes from rockpooling  to this species. So
the above is not from experience, but from books. No replacing experience,
so the other local fishermen must have an inkling of the problem and
developed ways of getting around the problem?

..."dermatitis caused by contact with a seaweed-like corraline, known to fishermen as curly weed, which grows in the shallow waters of the North Sea".. [also NW Scotland, Greenland, Norway]

...does not affect all fishermen: sensitisation can be "very gradual but once established it requires only contact with nets used in the area to precipitate an attack".

...Usual symptoms -Dermatitis on: backs of hands, wrists, forearms and insides of elbows.
...Once established can spread to: face, eyes and whole body.
..."Affected parts are itchy, reddened and swollen. The weeping and drying of the area causes painful cracks to appear in the skin. Where the face and eyes are involved there is marked swelling esp. around the eyes together with conjunctival inflammation"
...Treatment: "the only effective treatment is to remove the patient from all further contact".... should be advised to go deep-sea. Rash otherwise behaves like sea-sickness and staying ashore does the trick..

I make no comment concerning the fact that the chapter on "Diseases of Fishermen" (which includes an entry on "Tit Juice Conjunctivitis") immediately precedes that on "Pregnancy and Female Disorders"...


The other question to ask is whether there has been any change of fishing
practices preceding the ailments that have afflicted the fishermen, e.g.


Andy,
Thanks for your continued interest.
I've just forwarded a picture of my arm taken last July.

None of the above changed.
With the onset of the problem the first year I did nothing but try
to tough it out. My doctor had previously suggested to my mate who suffered
ten years earlier that perhaps when he started to wear gloves to
alleviate the problem that the resulting soft damp skin inside a glove was
more susceptable to penetration so he perhaps exaserbated the problem.

This did not prove to be the case as I was unable to tough it out
and had to succumbe to gloves, then rubber armbands and then total cover -
non of which seemed to slow the progress of sensitization.
Regards  John Chappell

>Is it possible that the cause is always a diatom? If it is responsible for
>the brown slime on ropes, net, etc then fishermen will be in continual
>contact with it

Some of the species of Alcyonidium form brown, slimy, gelatinous mats
on algae, ropes etc. These are not easy to at all recognize as
bryozoans - they look and feel like a 2-3mm thick layer of brown
slime, and another name for this group of organisms is 'slime
bryozoans'.

Unfortunately I can find no good photos of a slime bryozoan; probably
because these nondescript slimy mats aren't exactly photogenic.

FWIW, diatoms are rarely particularly toxic (although some are), and
are not commonly found in mats. If we're talking a mat-forming
microorganism, then my money is on either a cyanobacterium or
dinoflagellate - both of which tend to have heavy chemical defences.

Other stings and irritants (British seas only):