In June 1579, Sir Francis Drake circumnavigated the known world, to land on the west coast of North America at Nova Albion, better known to us now as California.

English ships, Spanish ships, Portuguese, French, Dutch, Arabic, in fact a world of shipping from every nation with access to the sea.

What on earth has this to do with Dogwhelks you may well ask?

All of those ships from that period were made of wood, and until the raising of the Mary Rose in recent years (the remains of which are on view at Portsmouth Harbour alongside the heavily restored 'Victory'), nobody from the twentieth century had ever seen one of the old galleons.

These old wooden ships, whilst they did a magnificent job at the time, all suffered from the same problem, the Teredo, the marine woodworm. This tiny mollusc invaded the hulls of ships and can reduce a plank of wood to dust inside a few years. Within a year or two, the hulls were also encrusted with barnacles and other growths, necessitating the removal of the ship from the water, for the hull to be scraped and rotten timbers replaced.

This all costs money and the many man hours scraping as well as the Teredo infestation leading to the sinking of many of the old merchantmen and fighting ships.

But what has this to do with Dogwhelks?

The Dogwhelk, Nucella lapillus, feeds on living mussels, barnacles and other gastropod molluscs. It spends its life on the rocky shoreline, normally living from four to six years and not moving much from its birth place.  This makes them a very easy subject to observe and to note numbers and general health factors. This is the point where the two aspects of this story begin to come together.

In the 1970s, it was first noticed that the Dogwhelks at certain beaches had ceased breeding and the numbers were declining. The alarm was sounded and questions were asked as this was a very abnormal event. 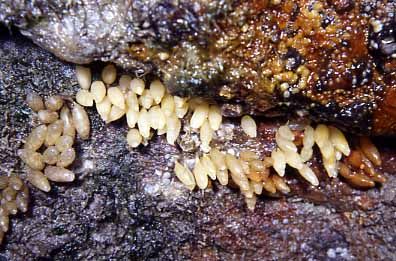 The female Dogwhelk, after internal fertilisation, lays masses of egg capsules amongst the rocks. In 1970 S J M Blaber discovered the occurrence of a penis-like outgrowth behind the right tentacle in spent females of Nucella lapillus. This condition was later to be called "imposex".  Later it was discovered that there was a high proportion of the chemical Tributyltin (TBT) in the dogwhelks and then it was proved that this was causing the "imposex" phenonomen, preventing the Dogwhelk from breeding and wiping out local populations.

Around 1986-87 the Marine Conservation Society, with funding from the Department of the Environment, began a survey of the British coastline to monitor the situation.

But where were the trace elements of TBT coming from ?

Many of the problems with Teredo were ended from the late 19th century as the first ironclad ships were built, and then steel plating came in the early 20th century; but the barnacles still adhered to the metal with as much gusto as they  had to the wooden ships.  The problem was no longer a question of rot, but as any sailor will confirm, a heavy encrustation of barnacles on a hull slows the speed of the vessel considerably and increases running costs, also making the ship heavy to steer.

Ship Owners wanted an answer and TRIBUTYLTIN was it!

This chemical additive, mixed with the marine paint used on ships hulls, proved to be the antifoulant that they had been dreaming of.

As I mentioned earlier in this story, the Dogwhelk feeds on barnacles, but only on the shore, so how could this innocent creature be affected by the paint on ships hulls ?

Investigation began to show that beaches with a proximity to harbours or heavily used shipping lanes were being affected badly, whilst more remote beaches were hardly affected at all. The obvious conclusion was that TBT was leaching from the paint on the hulls and entering the water as a trace element.

At least one Oyster fishery on the French coast had collapsed and TBT traces were proven to be the cause; even in minute doses the oysters showed stunted growth and disrupted reproduction. TBT traces have also been found in the surface layer of some areas of the oceans and as many creatures in their larval stages live in this layer for some time one has to wonder whether this Dogwhelk problem is only the tip of the iceberg!

The use of TBT in their hull paint has been banned on small boats and inshore trawlers, but currently, deep-sea vessels are still allowed to use it legally.  Perhaps this is the price we just have to pay.

At least the problem has been identified and the investigation will continue for some years to come.  Let us hope the outcome will prove to be a very, very small iceberg indeed. 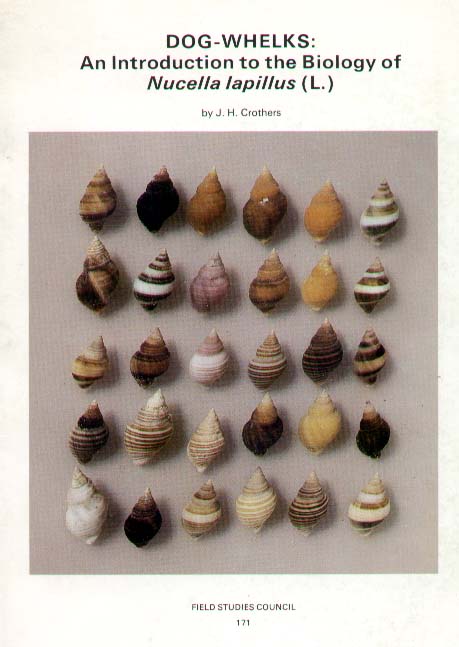