More than 300 million years ago, when the great thicknesses of limestone that now make up much of the Peak District were being deposited, there were warm clear shallow seas where England is now. They were full of life. Vast numbers of shelled animals lived on the seabed; there were corals in all shapes and sizes, and sea lilies. Sea lilies, or crinoids, are in fact animals. Each had a long stem attached to the seabed by rootlike projections, with a cup-shaped body at the top and long branched arms.

They were already old then, and they survive today. Sea lilies very similar to the Carboniferous fossils still live in the depths of the oceans; and their stemless cousin, the Rosy Feather Star, Antedon bifida, is so common in shallow water on the west coasts of Britain that divers must have seen it, although they may not have recognised it.

Crinoids are echinoderms, relatives of the sea urchins and starfish and brittlestars, and like them they have five-fold symmetry and a skeleton of calcite plates. Antedon bifida is an attractive little animal with ten feathery arms up to about 5 cm long. At their base is the tiny body, and below that, instead of a stem, a ring of little root-like cirri which grip the rock. They are usually pink or red in colour, sometimes orange; but I have also seen white, yellow, purple and brown specimens, and the arms sometimes have alternating wide stripes of pink and red. The pinnules - the side-branches which give it a feathery appearance - are often lighter coloured, and the cirri are very pale.

Feather Stars look a bit like some of the brittle stars, especially those that also lift their arms into the water to feed on suspended material. However, they are easy to tell apart: brittle stars have only five arms, not ten, and are not attached by cirri.

Since they feed by catching plankton - minute single-celled animals and larvae - and suspended material in the water, Feather Stars are common where there are moderate currents to bring food, but not too much silt to clog their feeding tube-feet. This means that they prefer to be above the bottom and its sediment, often congregating on vertical rock faces, and sometimes perching on other animals.

Scattered individuals are very common among the hydroids and bryozoa that cover the rocks, especially on vertical and undercut faces, but there they are remarkably inconspicuous, and you have to look carefully to spot them.

If their requirements are met, they are not fussy about depth. They will live anywhere from just below the low water mark to at least 30 metres (they were all over the upper works of the M2 the time I dived her) and probably deeper.
The Rosy Feather Star is found in almost all the seas around the British Isles, but appears to be absent from the eastern English Channel and southern North Sea. There are no records of feather stars being seen in the seas off Sussex.

The arms and pinnules are made up of innumerable tiny discs of calcite, with living tissue surrounding them and running through the holes in their centres. The arms are unexpectedly mobile; they not only curl inwards when the animal is resting and are spread out and upwards to feed, but are used for swimming.


When Antedon wants to move to a new position, the cirri release their grip and alternate arms beat up and down so the animal swims gracefully, if rather erratically, through the water. It may also hold the arms upwards in a narrow cone and parachute downwards with the cirri splayed out, ready to grasp whatever they touch first. If one arm of a swimming Feather Star touches the rock - or a diver - its tube-feet instantly grip it, and the arm bends rapidly, bringing the body round until the cirri can take hold; the arm then releases its grip, and the animal that was swimming barely a second before is securely attached and looks as if it has never moved.

Some feather stars hide in crevices during the day and climb up to suitable vantage points at night to feed. Although Antedon does not seem to do this, I suspect that they can change position by climbing up the rock with their cirri or by using arms and cirri alternately. I have never seen this; if you ever do, I would very much like to hear about it.

When they are not feeding, the arms are curled inwards in a very characteristic fashion. For feeding, they are extended up into the water with the pinnules widely extended. I usually see them when there is little current, and the arms are spread to collect edible material falling through the water, sometimes beating steadily. When the tide is running, they probably orientate the arms across the current to collect the food that is being carried past. Both arms and pinnules have innumerable tiny tube-feet, and when a food particle touches one of these it is trapped in mucus and passed down the centre of the arm and across the top of the body to the mouth.

The baby Feather Star is very interesting, because its first few months are spent as a stalked form. The adults produce eggs in spring and early summer in gonads on the pinnules. These hatch into larvae which are released to swim, without feeding, for one or two days while they chose a site to attach to - a rock or pebble, shell, seaweed, or other animal. There, each grows into a tiny stalked crinoid, a miniature but clearly recognisable relative of the fossil and deep-sea species. Those I have seen were a pale neutral-white colour, with the stem about a third of an inch long, topped by a minute calyx and ten arms held spread out into a wide food-collecting bowl. Finally they develop cirri at the base of the calyx, and then break free of the stem, which is left to die while the little Feather Star begins its adult life.

Why did the free-swimming feather stars evolve? The stalked  sea lilies held - and still hold - their body and arms high above the seabed, away from the sediment and in the food-bearing currents, on stems that could be two metres long. Like Antedon, they were gregarious, preferring to live close together; at times they were so abundant that the limy discs that supported their stems and arms make up much of the rock. It was clearly a good life.

But some 100 million years ago, about the time the chalk was being deposited, new species evolved that could crush hard shells: crabs and lobsters with powerful claws, and fish with strong teeth and jaws. It is only a guess that this was what made the shallow seas uninhabitable for the sea lilies, but it makes sense: although a stalked crinoid does not look like a particularly nutritious meal, it would be easy prey for anything that found it worth eating. After the new predators became common, stalked crinoids are found only in deep water; in the shallow seas they were replaced by species without stalks, feather stars which could swim to some extent and so were less vulnerable.

Next time you dive in the south-west or west, even round the  north of Scotland as far as St. Abbs, look out for the little Feather Star, and think of its ancestry. It may be small, but it has a long pedigree!

Two other species of Feather Star are found in British seas. Both are found in northern seas or in deeper water to the south.
The species Antedon petasus is larger and tends to be coloured in browns and oranges. It is much less common than the featured species but can be found in rather similar locations. This species must be reckoned as a possibility in the cold seas around Scotland south to the northern part of the Irish Sea. It has been discovered around Rathlin Island, off Northern Ireland.
The arms are about 7 to 10 cm in length. 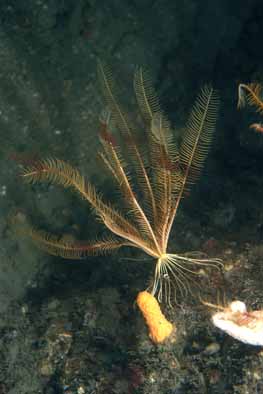 Until recently this species was only known from water deeper than 70 metres in isolated communities off the coast of Scotland.
SCUBA diver naturalists have recently discovered this feather star living at depths of 20 metres in sheltered localities and sea lochs around the west of Scotland.
The arms are about 7 to 10 cm in length.
Report

The feather stars may also have been preparing to breed. Many of those we saw had some of the pinnules, always those on the lower part of each arm, nearest the body, greatly thickened. They looked normal where they joined the arm, but almost immediately swelled by two or three times, then tapered slowly back to their normal dimensions. Typically the pinnules on the bottom one-third or two-fifths of each arm were affected, and the swollen part was sometimes as much as four-fifths of the pinnule, with only the tip being slender. I have not noticed this in feather stars before, but the gonads are apparently found in the proximal parts of the pinnules, where the swellings occurred, so perhaps they were producing and storing eggs and sperm ready for breeding in the spring.

All three British species of feather star occurred in the area, sometimes together. Antedon bifida, the smallest species which is also found in south-west England, often looked much more untidy than Antedon petasus and Leptometra celtica. This was apparently because its pinnules were not all in one plane, but held at three or four carefully varying angles, from almost horizontal to roughly a 45° angle, in an apparently regular sequence. Perhaps this gave a greater chance of intercepting food particles from the water.

On one dive, in a current, some individuals of all three species had adopted a most unusual attitude with their upstream arms angled sharply downwards from the body until they touched the rock on the up-current side of the body; then they flexed sharply so the rest of each arm was held up and forwards across the body, with the current. I think they were using the arms tubefeet to grip the rock, providing extra attachment points and reducing the risk of their being pulled free by the increasing current.