The Habitat Directive, adopted by the EU Member States in 1992, is the main Community instrument safeguarding biodiversity. It introduced the obligation to preserve habitats and species of Community interest. Each Member State is responsible for identifying and designating areas as Special Areas of Conservation (SAC's) which are important for the protection of the species and habitats covered by the Directive.

Together, the Special Areas of Conservation will make up the European network of protected sites, which is called Natura 2000. To ensure the project's success each Member State can choose the mechanisms it will use to implement the relevant conservation measures on its territory. The success of Natura 2000 therefore depends on the flill participation and commitment of all the countries concerned.

Unfortunately, there is a major delay in the whole process. The EU member states should have handed in their lists by June 1995 but most countries have still not yet complied with this. 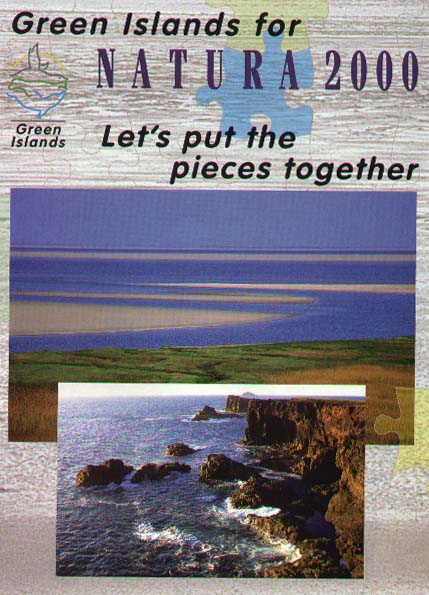 With "Green Islands for Natura 2000" , EUCC is focusing its attention on the obligations taken by the European Union Member States and investigatrng to what extent the countries have complied with their obligations and what they have so far achieved. The organisation will also investigate how much has still to be done before the Habitat Directive can be implemented in the various Member States. Furthermore, Green Islands aims to generate a broad general support for Natura 2000 through national and international publicity and public participation at a local level.

To achieve this the programme will consist of:

Expert organisations, site-managers, local communities, regional planners, NGO's and companies will all play a very important part within the Green Islands programme. These groups, called partners, can support the programme with financial means and through participation in international exchange of information and experience. The support of the partners will contribute to an easy accessible database. Thus, the Green Islands programme provides information, communication and marketing services for its partners. With the help of these partners, EUCC hopes to increase the chances of a successfiil implementation of Natura 2000.

The EUCC is the largest coastal network in Europe, with 750 memhers and member organisations in 40 countries. The organisation works together with the European Commission, the Council of Europe and the United Nations Environment Policy (UNEP).