In January 2001 I discovered a blue specimen of the Common Hermit Crab, Pagurus bernhardus from the east coast of the Isle of Wight. The legs and body of this hermit crab are usually orange and cream.  The reason for blue colour excited debate on several internet discussion groups. Originally it was thought that a parasitic rhizocephalan barnacle could be responsible for this phenomenon and the exact species is still a subject of discussion on the "Wet Thumb" Smart Group.There does not seem to be a reason why this is so, other than a blue Spider Crab, Maja squinado, was discovered to be parasiticised. However, list members of the Crustacean-L group have also suggested genetic, diet and environmental reasons for the colour abnormality. 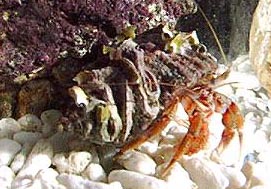 The blue Hermit Crab moulted on 9 February 2001, and as the rhizocephalan parasite prevents moulting, it seems unlikely this is the cause of the colour change. A Spiny Spider Crab in another Isle of Wight aquarium also moulted to a blue colour.

A rockpooling trip to Bembridge in April 2000 revealed something a bit special and unusual, and it arrived by accident. In the teeming rain I collected a weed covered rock from a deep rockpool, which was transported home by being rather crudely wrapped up in a plastic bag, and it was only when this attractive living rock was placed in the aquarium did a small Hairy Hermit Crab reveal itself. It turned to be a specimen of Pagurus cuanensis, which is rarely discovered between the tides. 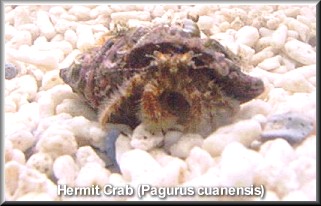 The Hermit Crab wasn't occupying a shell for some reason, so I chose a suitable sized shell for it from a spare lying around in the tank, it soon vacated it without much hesitation. I isolated the crab from the main tank for a couple of days to study it closer, and also to avoid any possible risk of it being attacked by the Corkwing Wrasse, Symphodus melops, I had at the time. A Worm Pipefish, Nerophis lumbriciformis, also fell off the rock into the plastic bag. This Bembridge beach is probably the most easterly location where this small fish is common on the northern coast of the English Channel. There have been a few records from Sussex though.

The Hairy Hermit Crab appears to be a bit of a loner, it doesn't get involved in constant scraps that go on between the common Pagurus bernhardus, but prefers to keep out of harms way. The crab was only ever seen munching on seaweed, so initially I thought the Hairy Hermit Crab was a herbivore, however this theory went out the window when I recently noticed it eating the leftovers of a dead shrimp! Unlike the common Pagurus bernhardus which will readily snatch food from my tongs; the Hairy Hermit Crab used to shy away from this and usually hide. It took three months before it ventured out into the open area of the tank to snatch food from my tongs.

Pagurus cuanensis is reported to be common around the length of the British Isles, but it is only rarely found on the shore, and this is the first rockpooling record of this species I have received. There must be hundreds of millions of small Common Hermit Crabs, Pagurus bernhardus, compared to each one of this species discovered. It is a much smaller species with a carapace only attaining a length of 16 mm compared to 35 mm of Pagurus bernhardus. Therefore, it will only inhabit the small winkle-sized shells. In captivity it is much hardier, especially in the summer months when it will survive in uncooled aquaria.

The third intertidal species is the South-claw Hermit Crab, Diogenes pugilator, that has been recorded by Ron Barrett in the sandy shallows of Dorset in numbers similar to the numbers of small Pagurus bernhardus off the Sussex coast. Diogenes pugilator can be easily identified because it is the only British species with the major claw on the left side (on the right side when viewed from the front) nearest the apex. This hermit crab often occupies empty tower shells, Turritella, which would seem a choice that would be ungainly, but this hermit crab occupies sand and mud shores where this gastropod buries itself. Diogenes often gets rolled about by the waves in the very shallow water on the low spring tides. 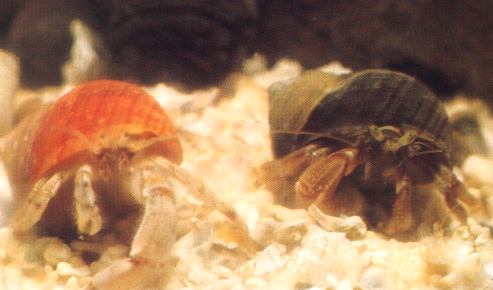