Link to the Hoverflies of 2006

The only other hoverfly seen was a 50% larger Marmalade Fly Episyrphus balteatus.

27 September 2005
I did not visit the Waterworks Road but passage through the Butterfly Copse frequent hoverflies (mostly Eristalis tenax but also Syrphus).


22 September 2005
A handful of Drone Flies, Eristalis tenax, were seen in all shady places with vegetation and they were probably widespread and prevalent.

20 September 2005
A Syrphus hoverfly was recorded in the Butterfly Copse (next to the Waterworks Road).

18 September 2005
At least one Drone Fly, Eristalis tenax, on Slonk Hill Cutting south, dozens of Marmalade Flies Episyrphus balteatus, and in a Shoreham garden a Helophilus pendulus buzzed around the pond noisily.

13 September 2005
Hoverflies were less than expected at the lower end of the Pixie Path (route from the Waterworks Road to Mill Hill) by the Butterfly Copse. A handful of Drone Flies, Eristalis, flew around the Ivy.

1 September 2005
Another Volucella zonaria was seen in the Butterfly Copse next to the Waterworks Road. There was a small Syrphus in the same copse.

30 August 2005
The hoverfly Helophilus pendulus buzzed (I did not actually hear it) around the brambles in the south-west corner of the Mill Hill Cutting by the Pixie Path.

25 August 2005
A Volucella zonaria hoverfly was photographed on Buddleia in my south Lancing garden, (TQ 186 044).

Report by Ray Hamblett on the Lancing Nature Gallery
15 August 2005
Passage by the Elm Corridor on New Monks Farm revealed two Volucella zonaria hoverflies and a further one at the Steyning Road entrance to the Maple Field Spinney by the Waterworks Road.
Volucella: Local List


8 August 2005
Another Volucella zonaria next to the Waterworks Road and this large hoverfly does not seem unusual any more, and along with the ubiquitous and very common (500+ in a day) Marmalade Fly Episyrphus balteatus, frequent Scaeva pyrastri, frequent Myathropa florea and occasional Erastalis tenax (the Drone Fly), means that hoverflies are numerous and most of them I pass unrecognised.

2 August 2005
The tall fragrant Fennel plant in my Lancing front garden is now a magnet to the neighbourhood hoverflies. There are around twenty hoverflies flitting around the flat umbelliforous flowers. Most of them are the ubiquitous Marmalade Fly Episyrphus balteatus, others including Scaeva are apparently taking the nectar from the flowers.

Another Volucella zonaria was seen in the scrub of the north-west of Mill Hill. Myathropa florea was widespread and frequent in the shadier places on the outskirts of Shoreham.

1 August 2005
In the damp shade of the Elm Corridor on New Monks Farm, flying insects included at least five species of hoverflies, including two of  the spectacular Volucella zonaria, the black and yellow Chrysotoxum bicinctum, the common Episyrphus balteatus, and other familiar species like Myathropa florea and the small Sphaerophoria scripta. A specimen of Volucella inanis was confirmed by a photograph (but not discovered until 17 August 2005). This hoverfly is appreciably smaller than Volucella zonaria.

The first and third images are from the Slonk Hill south bank, and the middle image is from the upper slopes of Mill Hill, just north of the Reservoir. The first hoverfly is Scaeva pyrastri and the others and mating pair are Sphaerophoria scripta.

10 July 2005
Species of hoverfly were collectively common in the shadier bits of the Slonk Hill south spinney, about 80 Episyrphus balteatus and at least a dozen Myathropa florea and more than half a dozen of at least one other species.

9 July 2005
A sighting of the large and spectacular hoverfly Volucella zonaria over New Monks Farm, Lancing, was the first of the year.

8 July 2005
Myathropa florea were frequent (20+) on the shadier bits of the Slonk Hill south spinney and present everywhere shady, but not as numerous as the common (100+) Episyrphus balteatus.

6 July 2005
Hoverflies included the species Helophilus pendulus (pic) on and around the Stinging Nettles on the Waterworks Road and the bumblebee mimic Volucella bombylans var. plumata was instantly spotted at the western entrance to the Field Maple spinney.

2 July 2005
One yellow and black hoverfly (it behaved like a hoverfly) in the Butterfly Copse next to the Waterworks Road was unfamiliar but it flew away before it could be photographed. Another hoverfly was Volucella inflata which I have only just been able to recognise.

20 June 2005
A distinctive hoverfly, the bumblebee mimic Volucella bombylans var. plumata was instantly spotted at the western entrance to the Field Maple spinney (hereafter called the Maple Spinney) footpath between the Waterworks Road and the Steyning Road. This hoverfly seems to be frequently seen (over 12 records, probably more like 50) in June.

17 June 2005
Hoverflies on the Slonk Hill southern bank included one Volucella bombylans var. plumata. This species is a bumblebee mimic. My garden in Corbyn Crescent hosted a Myathropa florea.

12 June 2004
Two of the usual hoverflies were on the A27 road bank at the top of The Drive in Shoreham: Myathropa florea distinguished by its appearance and behaviour, and a familiar one that has escaped precise identification. The hoverfly Merodon equestris settled in a Shoreham garden.

7 June 2005
At the top of The Drive, Shoreham, Marmalade Flies, Episyrphus balteatus, and other hoverflies were noticed in numbers in excess of twenty on one bush.

27 May 2005
A handful of the pretty hoverfly Leucozona lucorum were seen in the shady area at the top of The Drive, Shoreham.

18 May 2005
At the Mash Barn Lane end of New Monks Farm, Lancing, the hoverfly Volucella bombylans var. plumata was seen.

29 April 2005
The two following species are thought most likely to be hoverflies.

The first one was discovered on Green Alkanet at the southern end of the Waterworks Road. The upturned snout indicates a species of Rhingia although this protuberance (elongated face) would seem more suitable for feeding on the prevalent White Dead-nettle rather than the plant it was on.
Rhingia campestris for comparison (Link)

This suggestion was also made by Alan Hadley on the British Insects Yahoo Group
The Rhingia hoverflies have been identified as Rhingia campestris. This is the most frequently encountered of the two Rhingia. The larvae of this species breed in dung.
Identification by Stuart Ball on the UK Hoverflies Yahoo Group

Comparison photo of R. campestris and R. rostrata (Link to photographs by Nigel Jones)
The lateral margins of the tergites (dorsal segments) are edged black in R. campestris, this is clearly visible on the image posted. R. rostrata lacks this feature. Source.

The second smaller brown fly (above right photograph) was ubiquitous on wasteland like the Dovecote Bank.

3 April 2005
The hoverflies and bees are out in the sunshine for the first time this year. There was a handful of Episyrphus balteatus and the first two photographed below:

Certainly not a hoverfly, it has two pairs of wings. I printed off a copy and used a magnifying glass, looked at the wing venation [using Willmer] 3 SM cells; BV straight; D1 rhomboid; SM2 < SM3; hairy, brownish; the rest difficult to see but heading for Andrena sp.   However, look at the abdominal segment nearest the "waist" - I don't have a completely sharp pic - but I think I can
see something protruding from between the segments at the left hand side?  What do you think? Considering that the lethargic bee I found on a dandelion flower [mine was identified by Stuart Roberts as Andrena chrysosceles] was parasitised by 3 x female Stylops, it looks v. similar to your bee.
Andrena shortlist 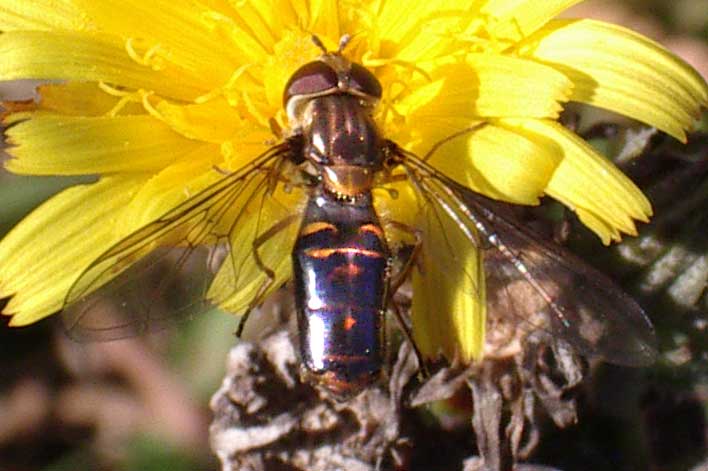 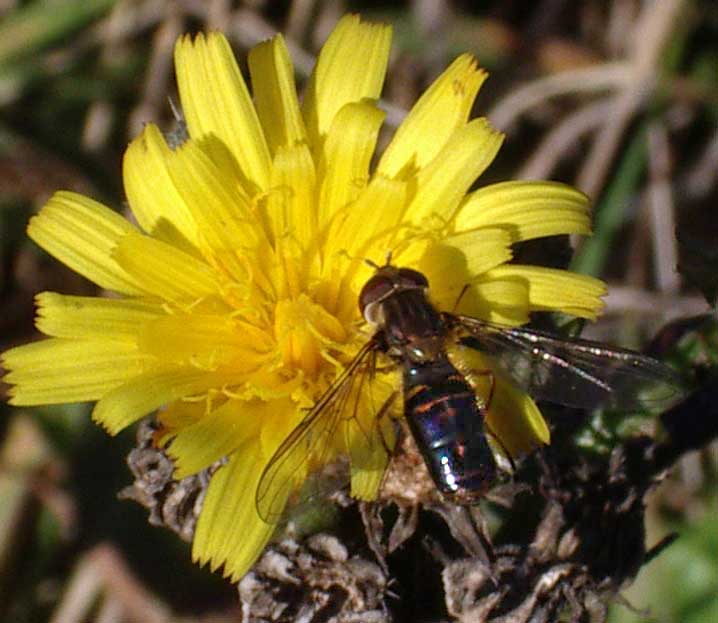 On the footpath approach to Mill Hill from the Waterworks Road I was buzzed by a few hoverflies of two species. One of these nectar seeking insects was the Drone Fly (hoverfly) and the other smaller one was  still awaiting positive identification at the time of writing. It hovered and behaved like a hoverfly. It is the photograph above left.
This is a black colour form of the abundant Episyrphus balteatus.
Because the insect was so dark in the photograph above I accentuated the markings in Photoshop (image manipulation program). The first photograph is shown on the right of how it appeared in real life.

4 October 2004
On the footpath approach to Mill Hill from the Waterworks Road, at least three species of hoverflies including one Helophilus pendulus, a handful of Syrphus hoverflies (with a yellow face and a bright yellow abdomen when viewed from the side) shown in the photograph below, as well as Drone Flies, Eristalis, were attracted to the Ivy.

21 September 2004
There were two distinctive hoverflies on the ivy with bees, wasps and Drone Flies next (west side) to the footpath approach to Mill Hill from the Waterworks Road: the medium sized Helophilus pendulus which I had not recorded before, and the large colourful Volucella zonaria.

16 September 2004
The following hoverflies were photographed on the footpath approach to Mill Hill from the Waterworks Road:

The first two are the same species, probably Eristalis, and could be mistaken for bees. The one on the extreme right looks like Syrphus.
Hoverflies (Syrphidae), tribe Eristalini

Eristalis pertinax (not this one)
General Notes (not referring to this specimen):
E. pertinax is a common and fairly easily recognised species, though it can be confused with the Drone Fly, E. tenax. The latter has a broader facial stripe between the eyes and little or no yellow on the legs - specifically the tibiae of the hind legs are dark in E. tenax whereas they are distinctly bicoloured in E. pertinax. Whereas the abdomen is tapering in E. pertinax, causing it to resemble a worker Honey Bee, the abdomen is more nearly cylindrical and "chunkier" in E. tenax, so it is more like the drone.
Source: Dr. Alan J. Silverside


31 August 2004
The large hoverfly Volucella zonaria was nectaring on Ivy near the Butterfly Copse next to the Waterworks Road.

30 July 2004
The Hoverfly, Episyrphus balteatus, is now common with over a hundred in a single Shoreham garden and these numbers are expected to be repeated everywhere locally.

18 July 2004
As the sun struggled to come out, so did the flying insects including at least five species of hoverflies. Five of them were seen in a small patch of garden (amounting to a half a dozen flowers and shrubs) near Buckingham Park, Shoreham.

At the time of writing all the hoverflies have not been positively identified, but the following four were definites: the Marmalade Fly,  Episyrphus balteatus, Syrphus possibly vitripennis ?, Eupeodes possibly corollae, Volucella bombylans and at least one much smaller species. It appears that for positive identifications to species level some of these hoverflies need to be captured and examined under a powerful microscope. I may have to satisfy myself with just the name of the Genus.

The photograph above is of the suspected smaller species which may be too small and the photograph (click on the image to enlarge) not distinct enough for positive identification. The wings in this species are nearly as long as its abdomen which is all black at the tail end.
This species is not Meliscaeva auricollis.
This identification has been corrected to Platycheirus albimanus by David Iliff on UK Hoverflies.

30 July 2001
Hundreds of Hoverflies, Episyrphus balteatus, invade Lancing (TQ 186 045). With their maroon head a wasp-like abdomen it is easy to understand why they are christened the Marmalade Fly.

Similar large immigrations have been reported from Dorset, especially from Portland Bill.
Hoverfly Report by Ray Hamblett
"A couple of hundred came in through our conservatory. Most of them came in through the patio doors and buzzed against the ceiling, then died due to the heat. I hoovered up the dead four times during the day and one time actually counted 53 bodies on a 3 metre length of window cill."
Report by Peter Weaver
I have noticed a few hundreds around, but they are usually present and there seem to be many more this year.
UK Hoverflies Discussion Group

The World of Syrphidae