Notes on Homarus gammarus in captivity

At he beginning of December 1998, fisherman David Piers from Eastbourne, Sussex, hauled in a Lobster weighing 13½ lb (6.12 kg, as the measurement was still made using the old imperial system). This is a monster specimen, dwarfing the normal sized ones; the large crushing claw was as large as a small lobster. Very few European Lobsters, Homarus gammarus, get that big although the record from Fowey in Cornwall caught in 1931 weighed a colossal 20½ lb (9.3 kg).

These huge lobsters are not caught in the normal lobster pots for the simple reason that they are much too large to fit into them. They also tend to live in deeper water than where the pots are set.

Lobsters have been kept successfully for years by the home aquarist but because of their large size are more suitable for Public Aquaria. All aquatic crustaceans present their own special problems in aquaria because of their method of growth that requires the periodic moulting of their shell to make room for the new shell growing underneath. The new shell is soft and the lobster has to find a place to hide whilst the shell hardens by resorbing calcium from the old shell and incorporating minerals from the surrounding seawater. This means that the aquarium water must be rich in the required minerals. 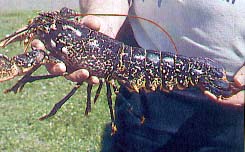 Aquarium water changes over a period of time with the increase of nitrates well known to the students of biological filtration, but also there is always a drop in pH values to about 7.8 if the required water changes are not made, as well as a shortfall of calcium, magnesium and other minerals required by the new shell. When keeping lobster and the larger crabs through their moulting cycle, it is imperative that the 25% monthly water changes are made. This is the absolute minimum and for success the water changes may need to be more frequent. Some Public Aquaria use a natural flow system where seawater is pumped in and out of the tanks when the tide comes in. This has advantages when keeping invertebrates but it is rarely the best system when keeping fish.

In the soft moult condition, all crustaceans are vulnerable to being attacked by hungry fish and even other lobsters.

The large Lobster has been transferred to Brighton Sea Life Centre where it has been housed in the huge Tope tank with another large (10 lb +) lobster. On first impression, this choice of tank may not be a sensible choice, but with a 2% change of water every day, this tank has more water changes than the smaller tanks. Because of extensive building work above the Aquarium the choices were limited. These very large lobsters are not mobile like the younger lobsters and are unlikely to catch fish, although they are able to successfully scavenge for squid and crab etc. fed to the tanks main inhabitants. If  this large lobster shows any sign of moulting (unlikely) it will be fished out and put a special tank for its own protection.

The frequency in which lobsters enter pots indicates their preference of carrion as the easiest food to obtain when available. However, the seabed is full of scavengers and lobsters cannot rely on this source of food. They are formidable equipped with a large crushing claw to tackle mussels which they can crack open and a smaller cutting and shredding claw to prise the flesh from the mollusc. In aquaria, they will push the sand up to the front of the glass to make their den to hide in and to successfully ambush and catch free swimming fish like the Whiting.

Their great demands for food requires them to be kept in a larger tank than their physical demands suggest. Although they will eat every part of their prey, some remains may be left in the tank or even buried by the lobster. Although, all crustaceans can tolerate higher levels of ammonia and nitrites than fish, the uneaten remains can still use up valuable oxygen in the water.

The death of lobsters in captivity at the moult (ecdysis) stage can also be attributed to inadequate nutrition. With the very largest of lobsters the aquarist may not be to blame if the lobster dies as it may not have obtained nutrition in the wild to satisfy its huge bulk. There does not seem to be a maximum size that a lobster can attain and the biggest lobster will be one that can survive all the considerable hazards in the sea.

Looking into the lobster bays is a real education, with about 50% being right handed (the side of the crushing claw) with the rest left handed. Others seem to have a variety of claws that are not easily identified as crushing or cutting, but between the two. Colours vary from almost black to a very light shade of blue with some being pink. 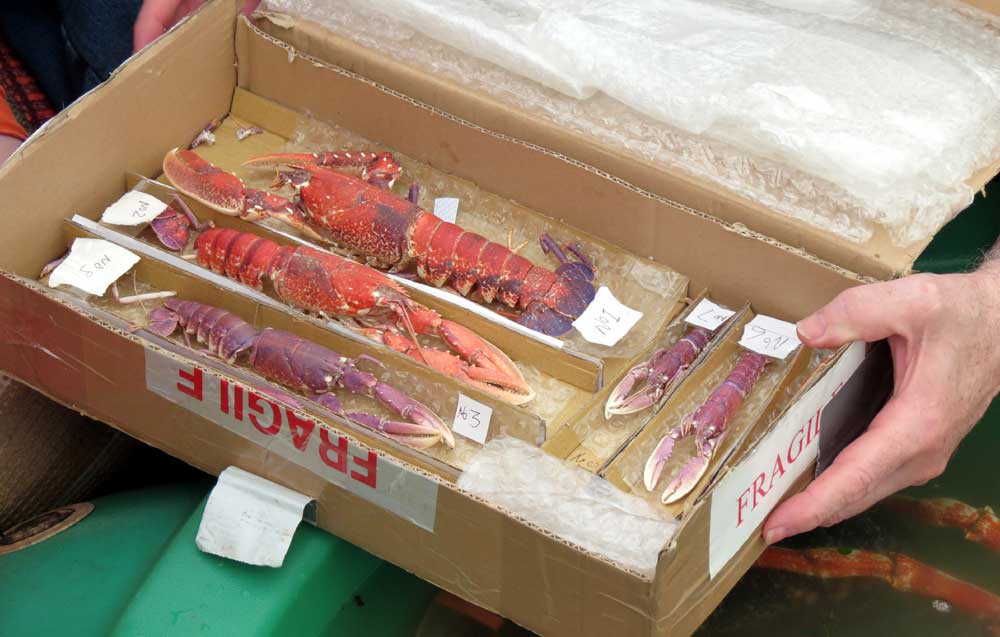 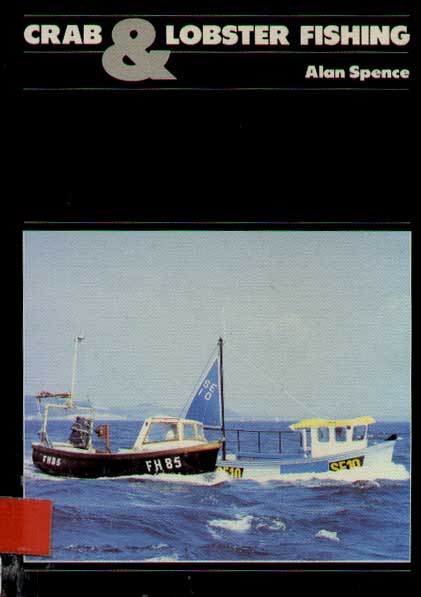 
Guess the Weight of the Lobster Form