Some Indicator Plants of Ancient Downland 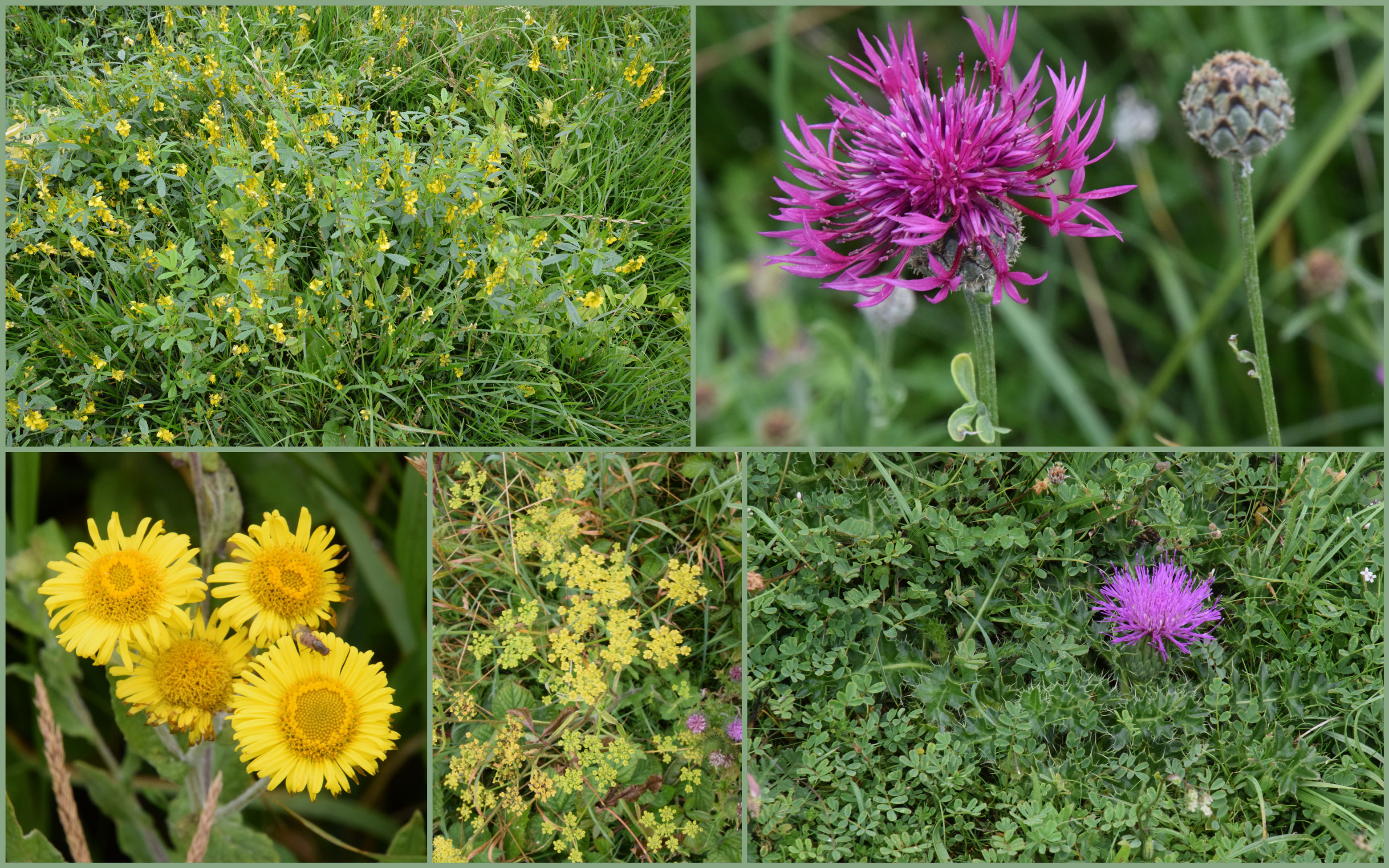 
After a rain sodden and cloudy week, moderate rain curtailed my visit to Mill Hill before any resting butterflies were disturbed on the lower slopes. Dwarf Thistle was common. The first shoots of Carline Thistle were seen.

23 July 2021
At last, a handful of male Chalkhill Blue Butterflies fluttered restlessly over the lower slopes of Mill Hill. 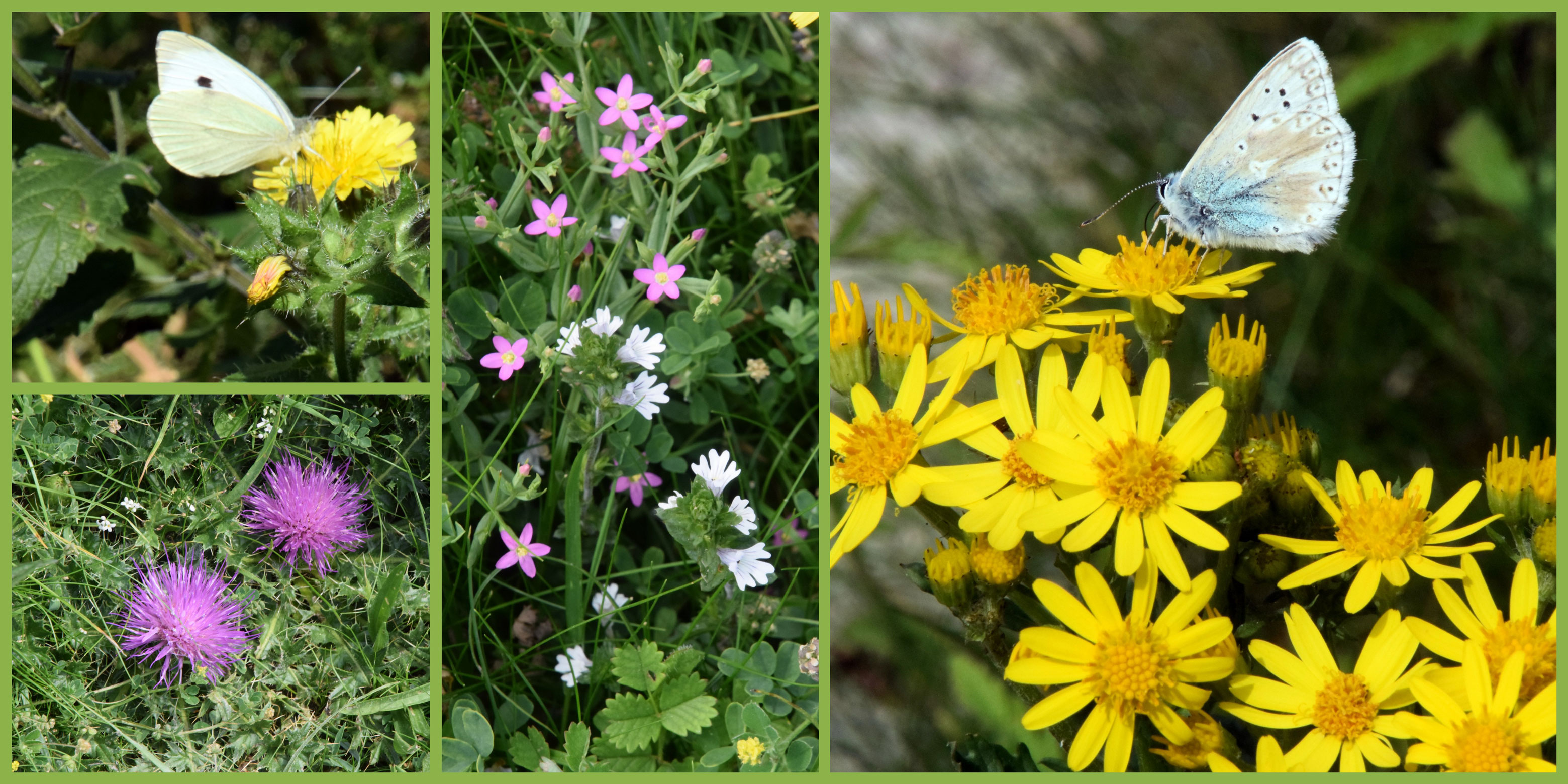 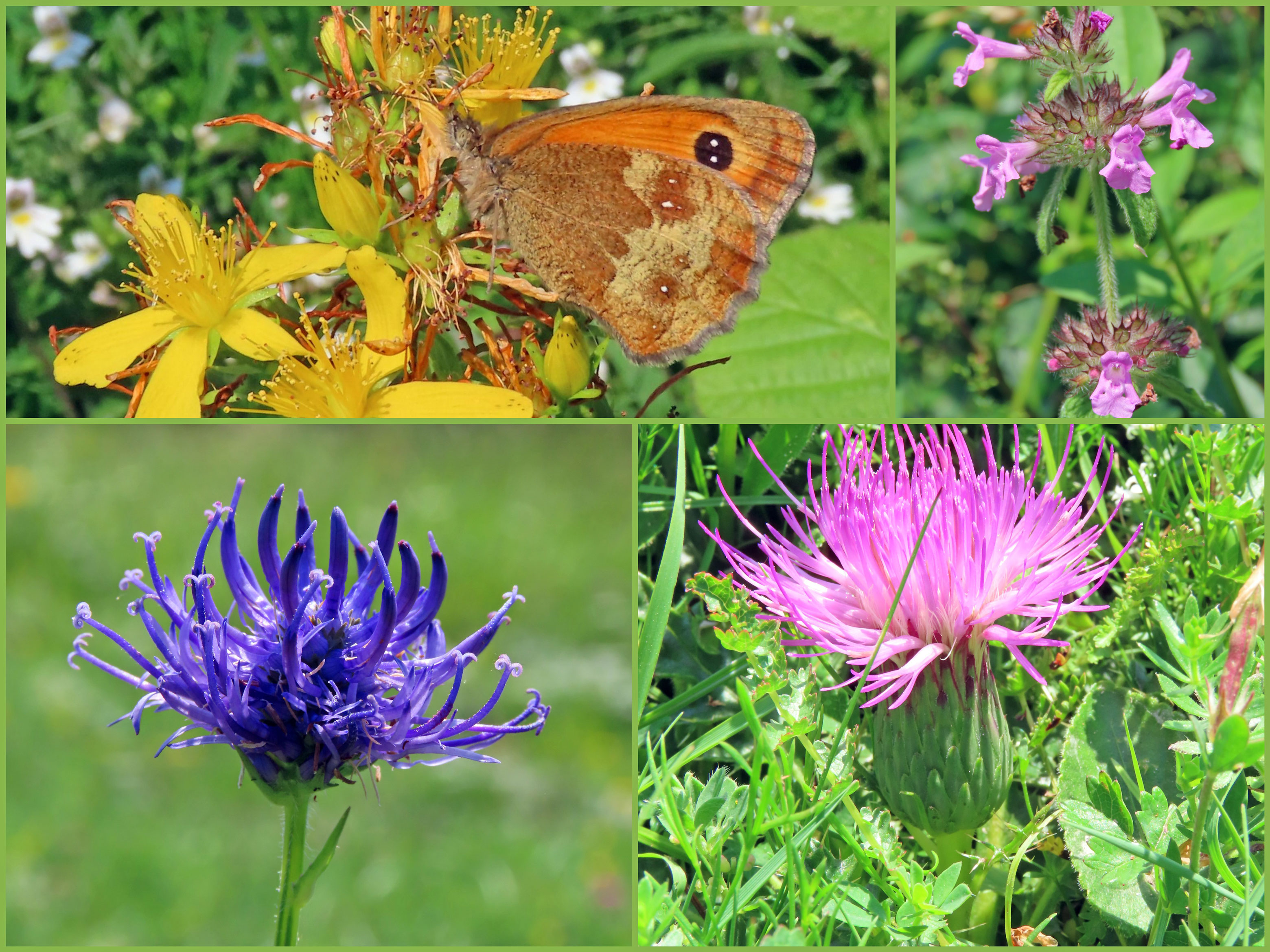 18 July 2021
On a virtually cloudless day the sun (25º C) burned anybody who ventured out of the shade. I still visited the upper part of Mill Hill in the mid-afternoon where two dozen butterflies fluttered around the attractive selection of chalkhill flowers amongst the long grasses south and west of the top car park. Marbled Whites. Large Whites, and Meadow Browns were all restless. There was at least one Small Heath, a probable Wall Brown and my first Painted Lady of the year on the middle slopes south of the copse, 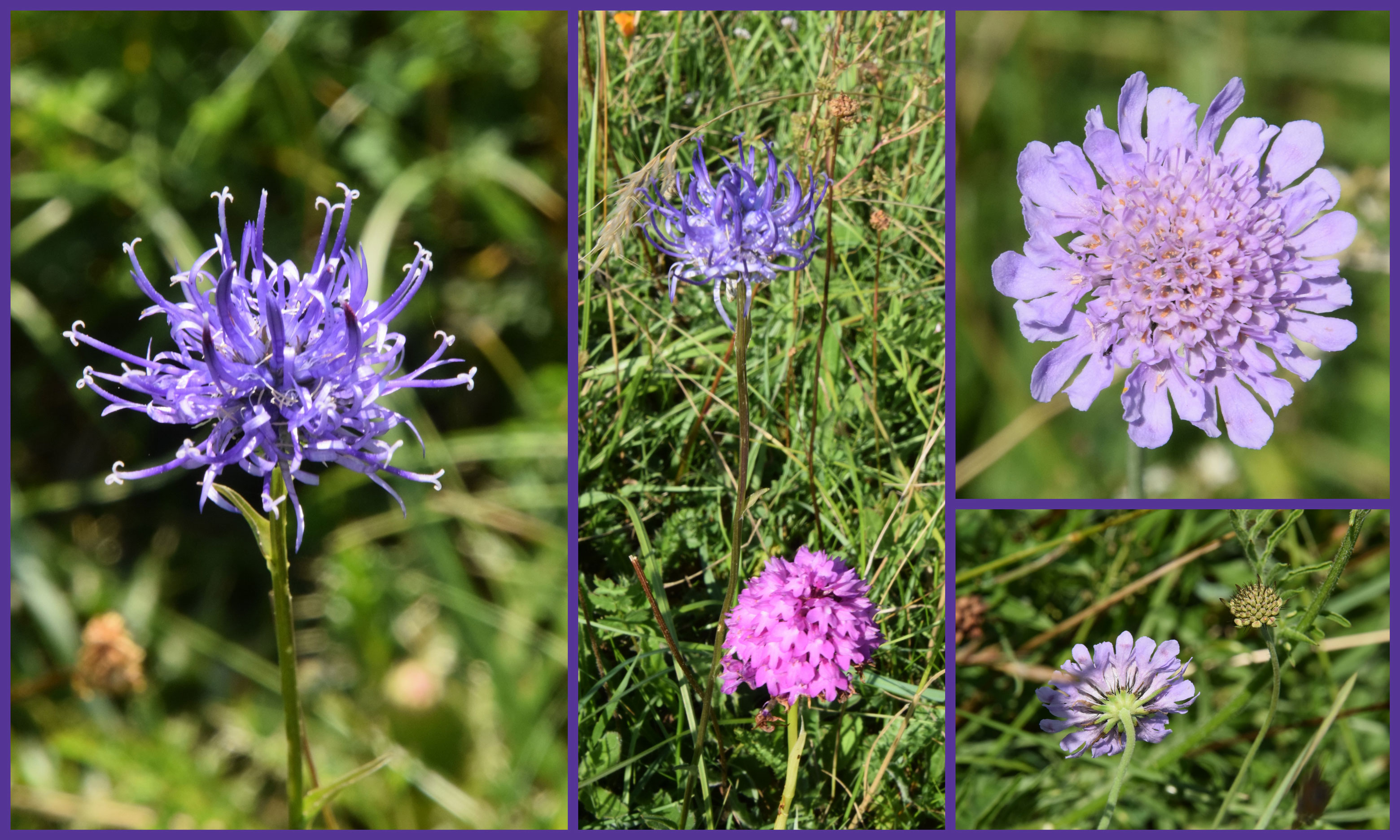 Notable flowers were frequent and more than usual Round-headed Rampion, frequent Small Scabious, and Greater Knapweed on the exposed top of the hill. On the sheltered middle slopes the notables were Melilot, Lady's Bedstraw, Marjoram, and Field Scabious. 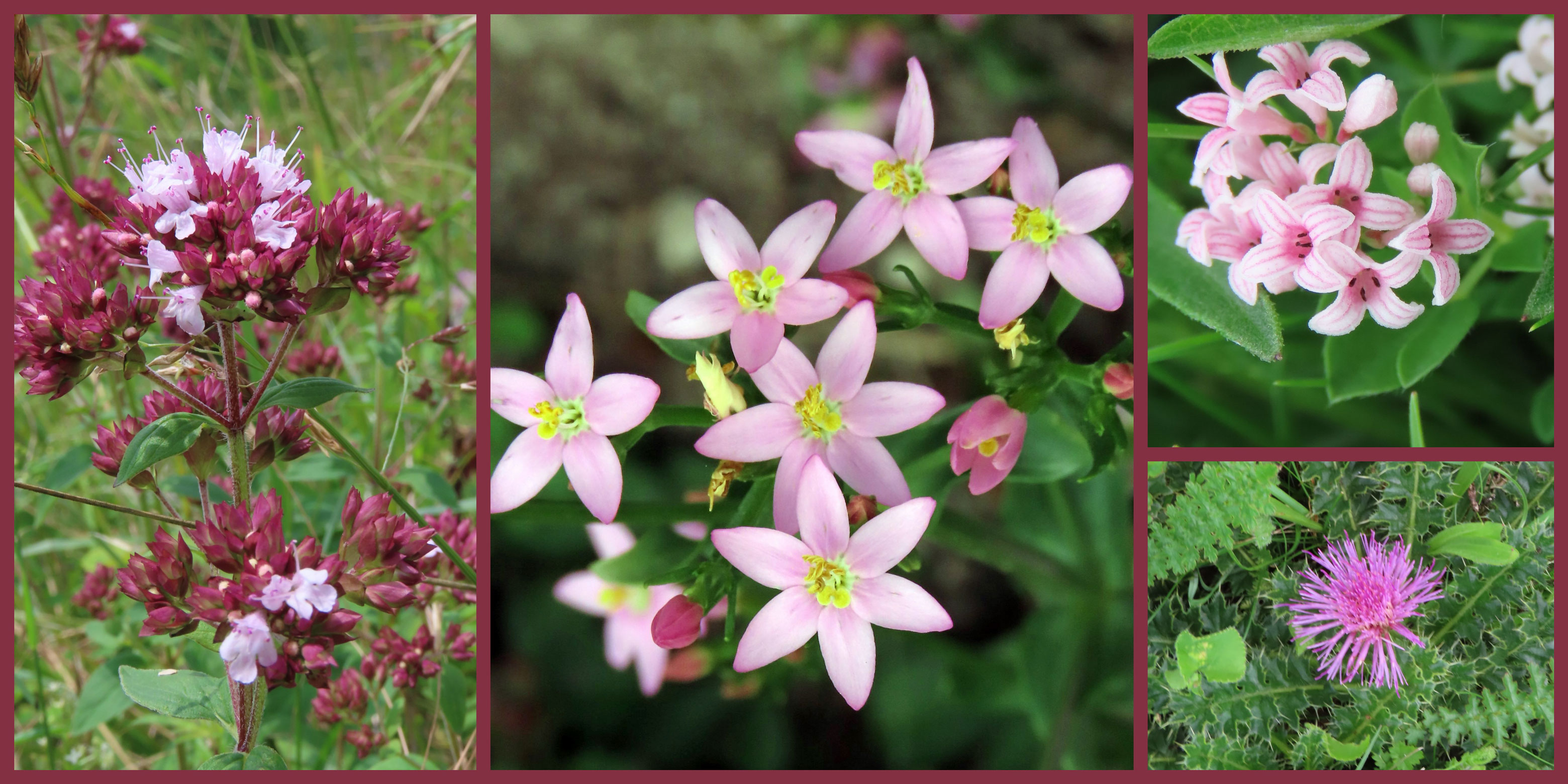 A couple of Gatekeepers on the southern steps to the lower slopes were the first of the year, Other butterflies were occasional Marbled Whites. Large Whites, Meadow Browns, Red Admirals, a few Small Skippers, Small Heaths and one Wall Brown.

28 June 2021
Marbled White Butterflies were very lively over the lower slopes of Mill Hill where I also spotted my first Small Skipper of the year. New flowers appeared on a cloudy humid afternoon. Small Heath Butterflies, pristine Red Admirals, large Meadow Browns, a Silver Y Moth and a 6-spotted Burnet Moth were noted as the first spots of rain were felt.
A Great Green Bush Cricket, Tettigonia viridissima, was spotted on the southern top part of Mill Hill for the first time.
Adur Crickets and Grasshoppers 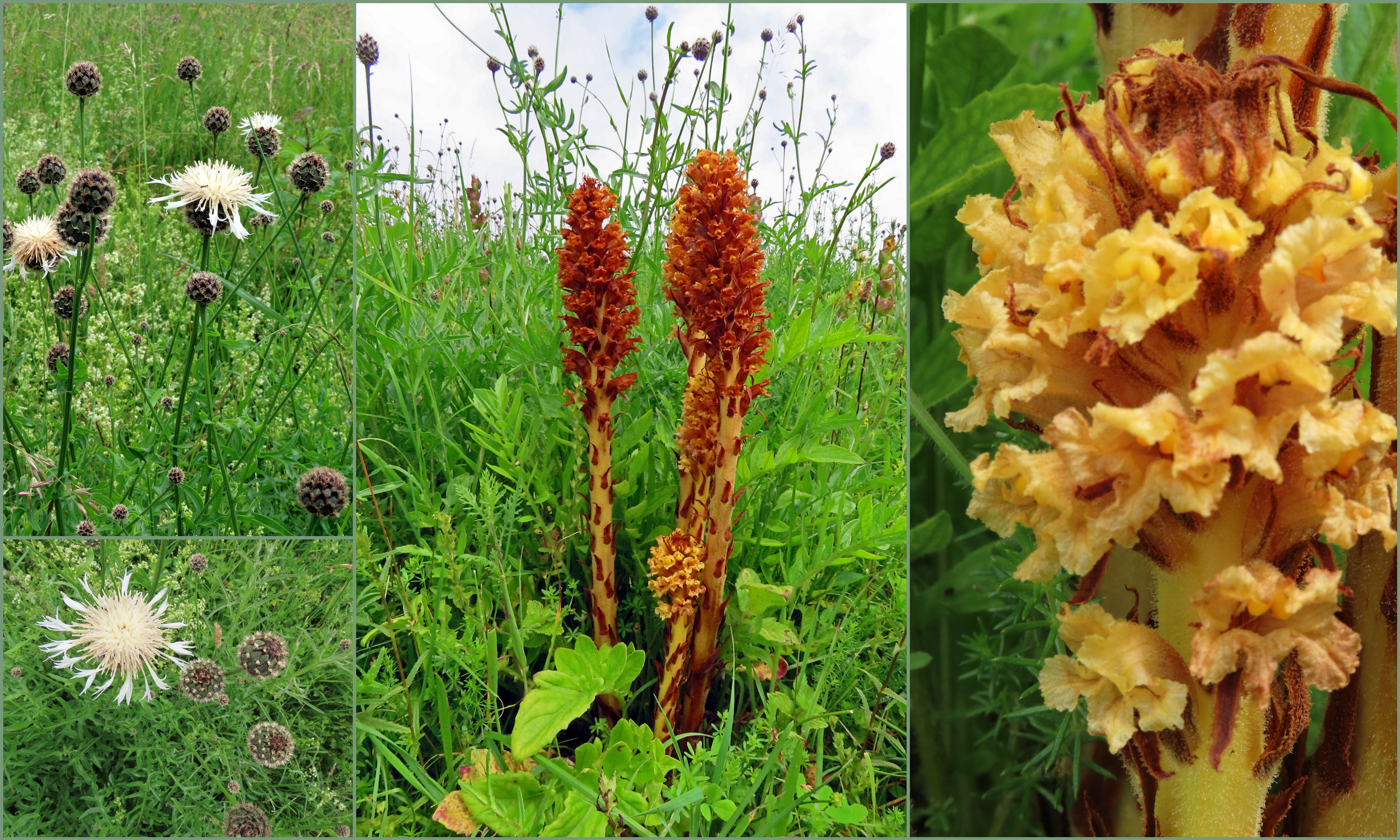 A Buzzard soared over a sunny (19°C) Mill Hill in the early afternoon. Butterflies were lively and frequent: Common Blues, Dingy Skippers, Small Heath Butterflies, Brimstones and Silver Y Moths over the lower slopes. A Holly Blue fluttered by the hedge by the southern car park to Mill Hill. 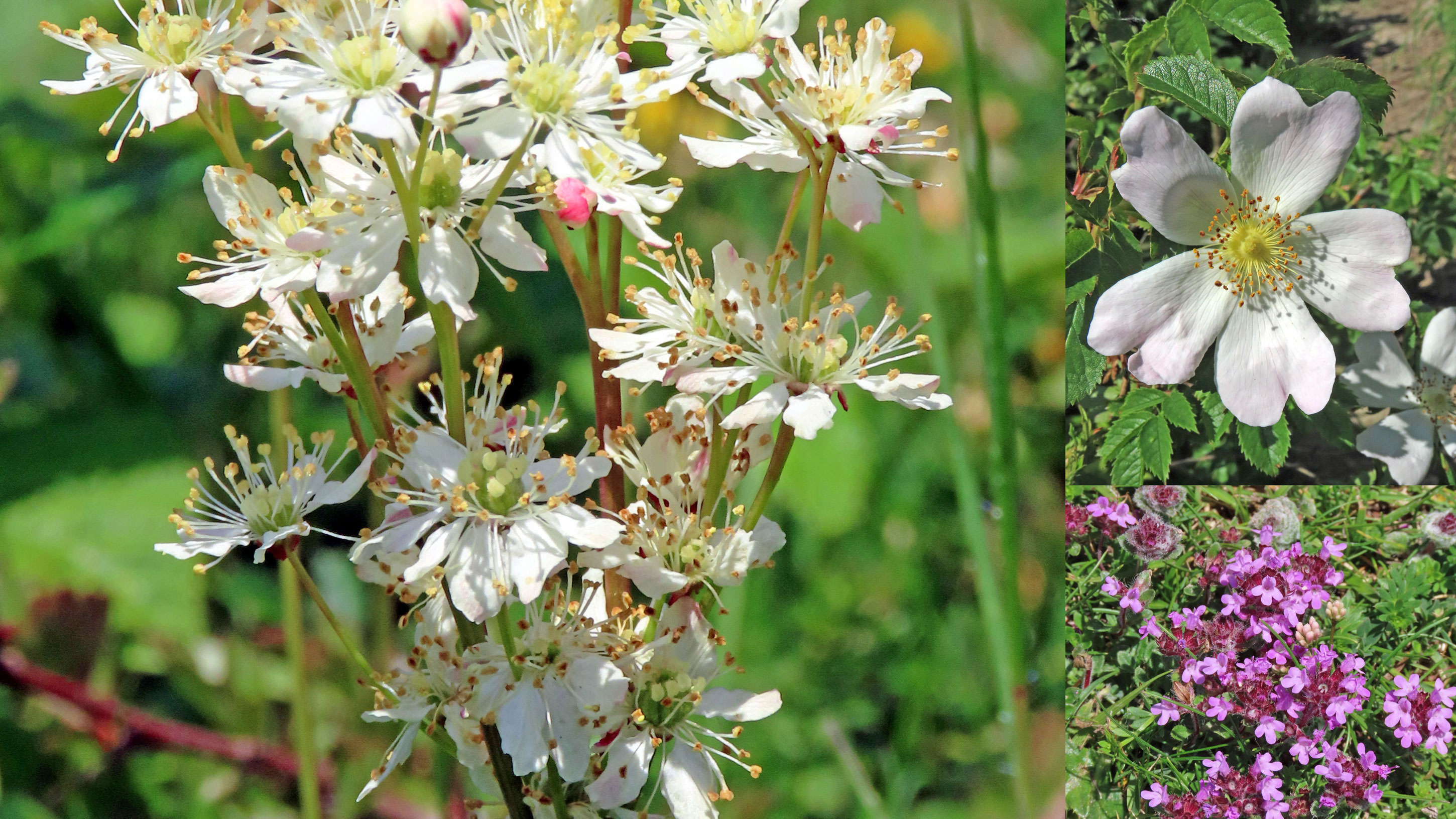 The first flowers of Dropwort and the dimunitive Thyme appeared.

31 May 2021
Butterflies fluttered over the sun-drenched (21°C) lower slopes of Mill Hill: 30+ male Common Blues, 4+ male Adonis Blues, frequent Dingy Skippers and Grizzled Skippers, my first Brown Argus and Cinnabar Moth of the year, frequent Brimstones, a few Small Heath Butterflies and a probable Wall Brown. By the flowering Hawthorn-lined road there was a Holly Blue. All the butterflies were restless.

On the southern top of the hill, the first Greater Bird's Foot Trefoil was seen in flower.
Common Bird's-foot Trefoil Lotus corniculatus is shorter and grows in dry grassland. Its stems are solid whereas the stems of Lotus pedunculatus are hollow. 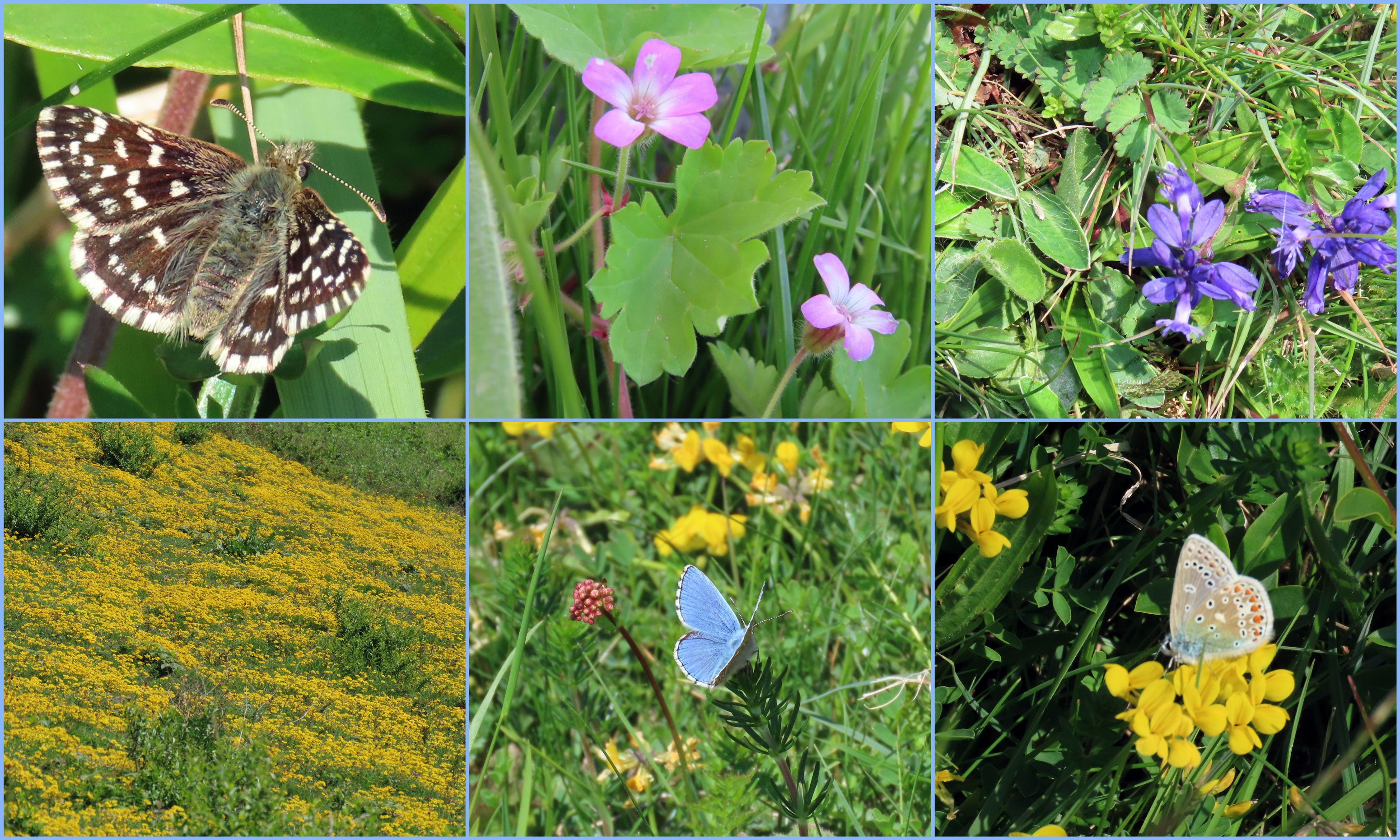 The sun shined in the afternoon for the first time in over a week, I was able to confirm my first male Adonis Blue Butterfly of the year with frequent Brimstones but not many other butterflies on the lower slopes of Mill Hill. There were occasional amorous Wall Browns. a few Small Heath Butterflies, a few Dingy Skippers, Grizzled Skippers, and Common Blues (including a dark blue female). At the top of Chanctonbury Drive, there was the flutter of a Holly Blue and some Large Whites. Early Elderflower appeared. 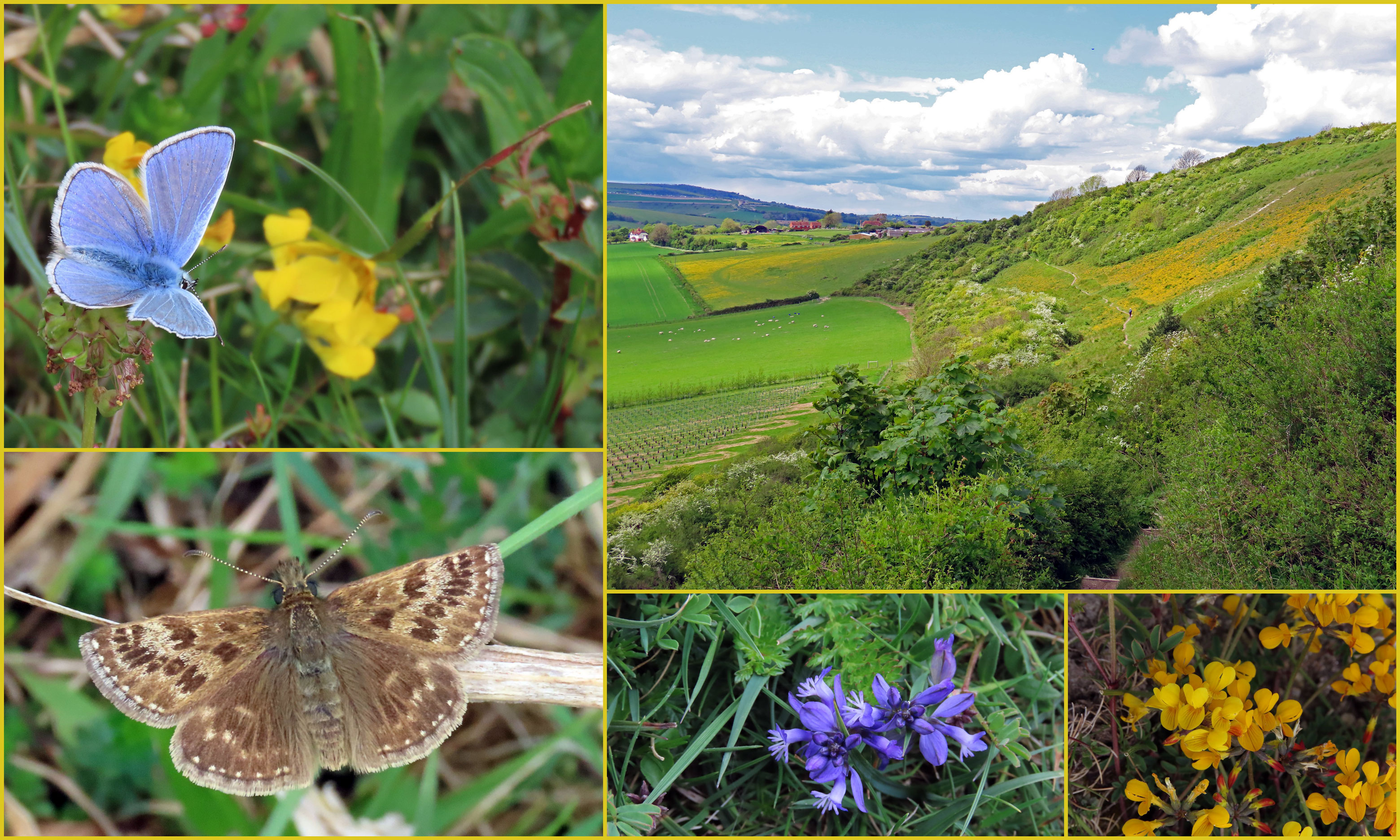 
Swathes of Horseshoe Vetch, Hippocrepis comosa, covered the lower slopes of Mill Hill on a cloudy afternoon inimical for watching butterflies. In an hour I spotted to my first of the year Small Heath Butterfly and a few first of the year Dingy Skippers, at least three male Common Blues, a Brimstone Butterfly, a few Large Whites and Red Admirals. At the top of Chanctonbury Drive, the flutter of blue was a Holly Blue. 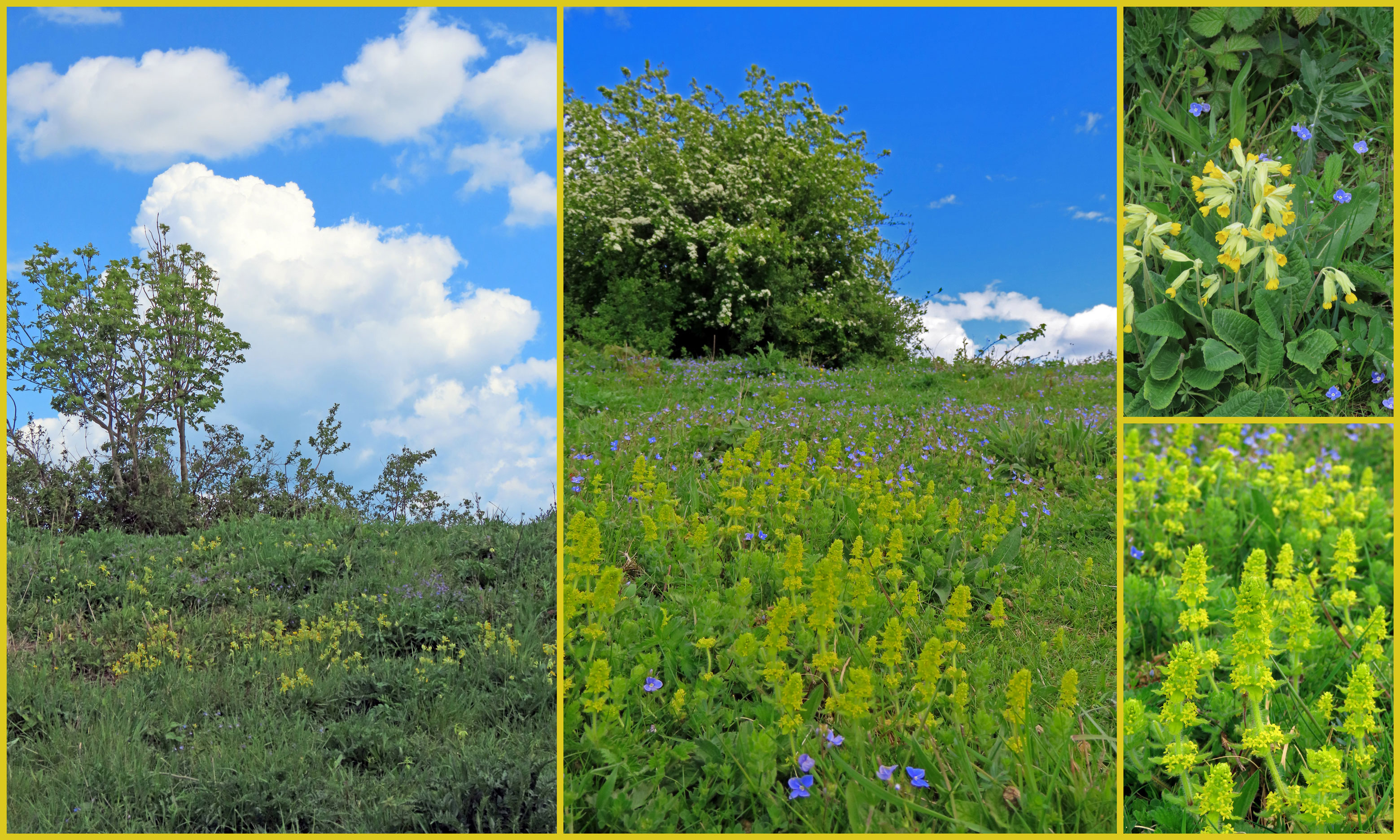 Hawthorn was beginning to flower in the hedgerows. Patches of Crosswort, Cowslips and Germander Speedwell decorated the area south of the Reservoir.

A Buzzard soared overhead  mobbed by the frequent Crows. And a rather scruffy Jay put in two appearances.

12 May 2021
Five o'clock in the afternoon is a bit late in the day for seeing active butterflies on the lower slopes of Mill Hill as most of them will have gone to roost. I managed to spot my first male Adonis Blue (not confirmed -subsequently thought to be a Common Blue), and my first of the year Small Copper visiting the abundant Horseshoe Vetch, Hippocrepis comosa. A flock of up to a dozen corvids, mostly Jackdaws. were persistently feeding on something amongst the short vegetation on the steeper slopes. A Peacock Butterfly flew down and I disturbed a handful of Grizzled Skippers.  Hawthorn was beginning to flower. Cowslips were seen south of the Reservoir. 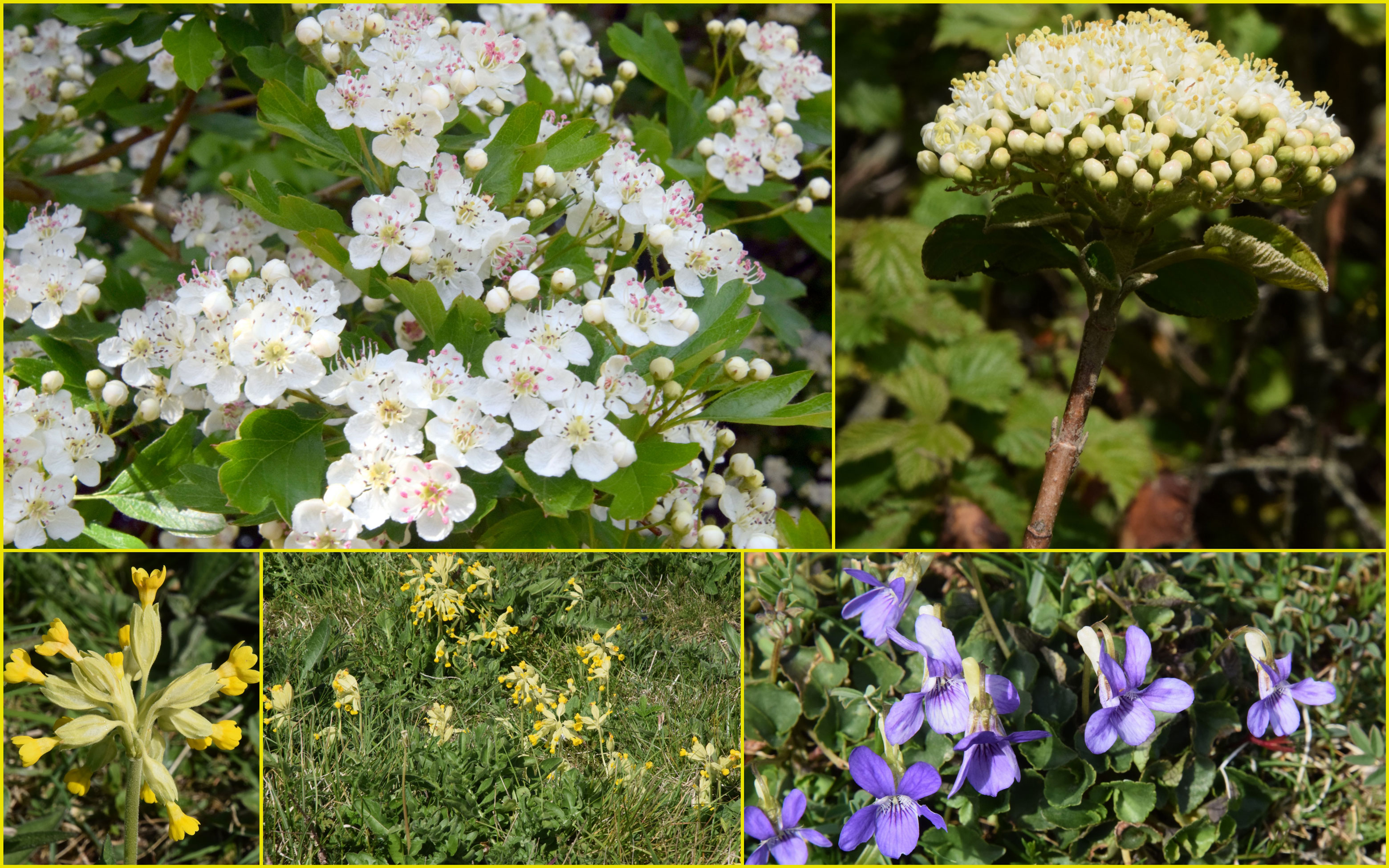 7 May 2021
Tripping over butterflies at Mill Hill today with a grand total of 14 species recorded. Dozens of Dingy Skipper & Grizzled Skipper, Green-veined White, Small White, Brimstone and a singleton Orange-tip doing the rounds. Wall are coming along nicely with at least half a dozen bobbing around, a female already ovipositing. A handful of Small Copper seeing off all-comers which included my first Common Blue of the year, around 6 males seen. Green Hairstreak also doing well, regularly getting stuck in with the multi species aerial brawls, again about half a dozen active. The afternoon brought out 4 or 5 fresh looking Peacock and like Abbots Wood on Wednesday, there were good numbers of fresh immigrant Red Admirals, a female was seen egg laying (from the state of some they must have come via Jersey!). A single Comma made a very brief appearance (unable to tell if it were an early hutchinsoni or a late hibernator). The day started off with a rare Sussex sight of a female Small Tortoiseshell avidly investigating some nettle on the edge of the horse paddocks on the south side of the Shoreham Bypass. 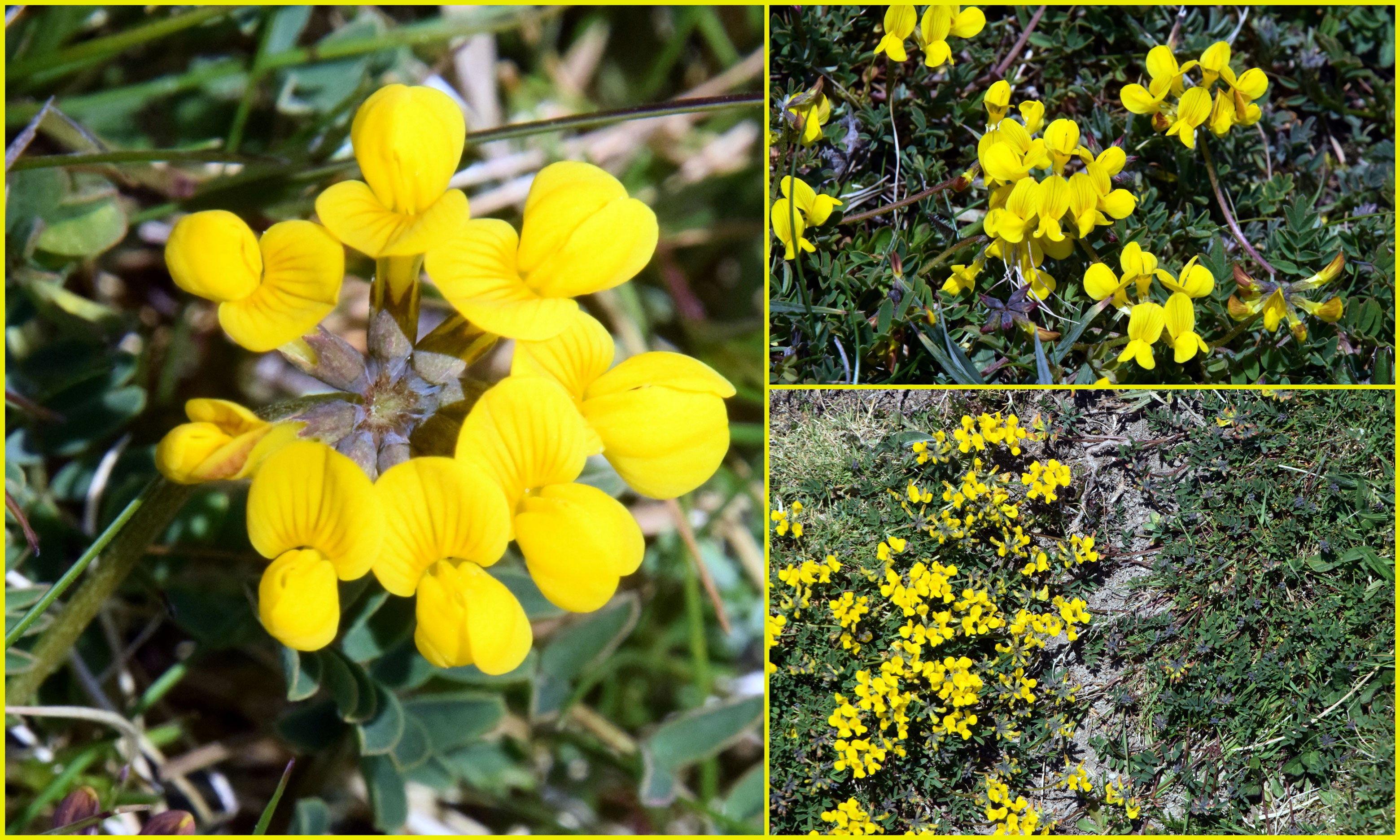 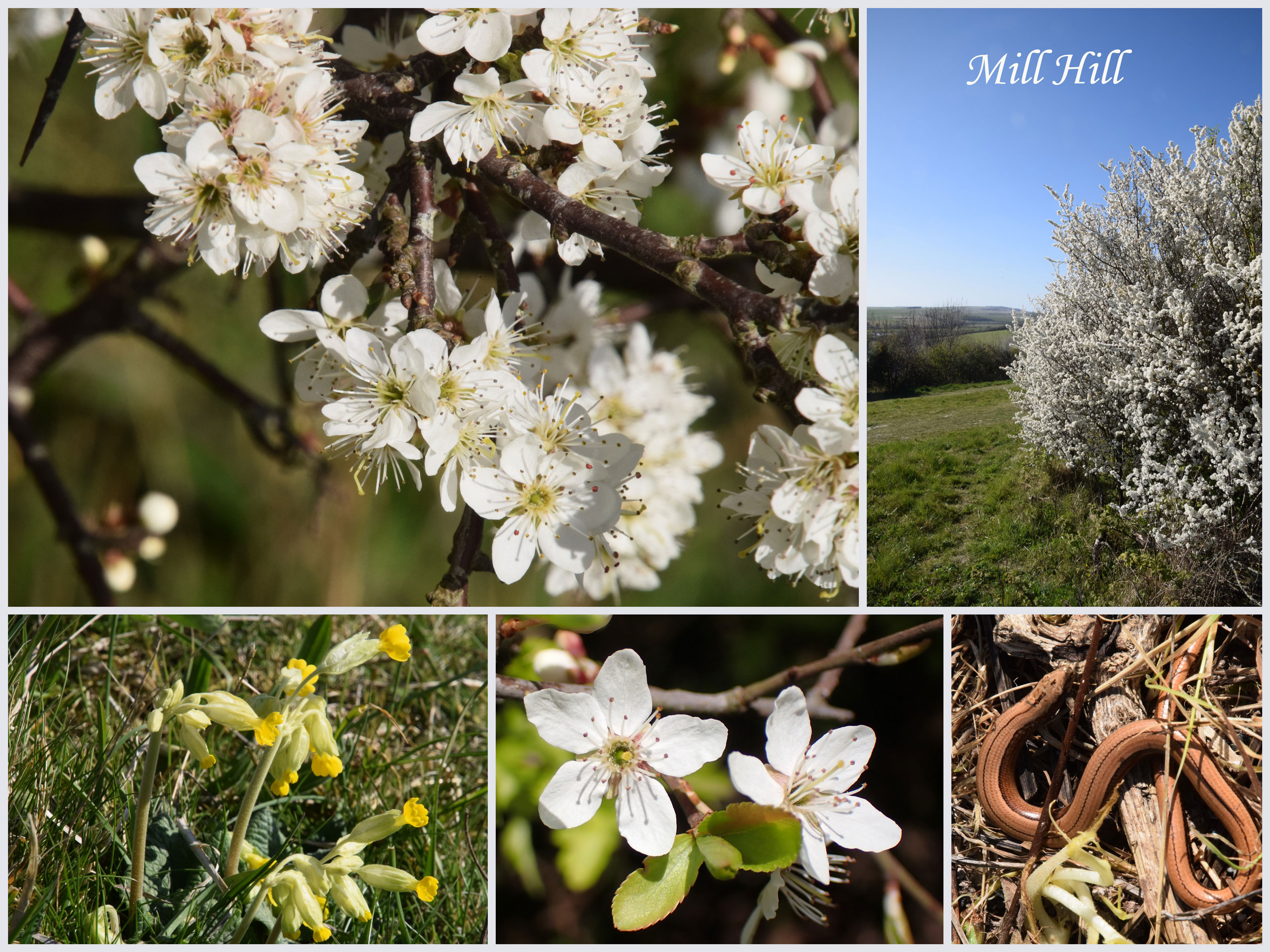 A few Peacock Butterflies visited the battered and frequent Sweet Violets and Dog Violets scattered thinly over the lower slopes of Mill Hill. A bright yellow Brimstone Butterfly fluttered by the Holly Tree, where the Wayfaring Tree had been hacked down by the conservation workers. 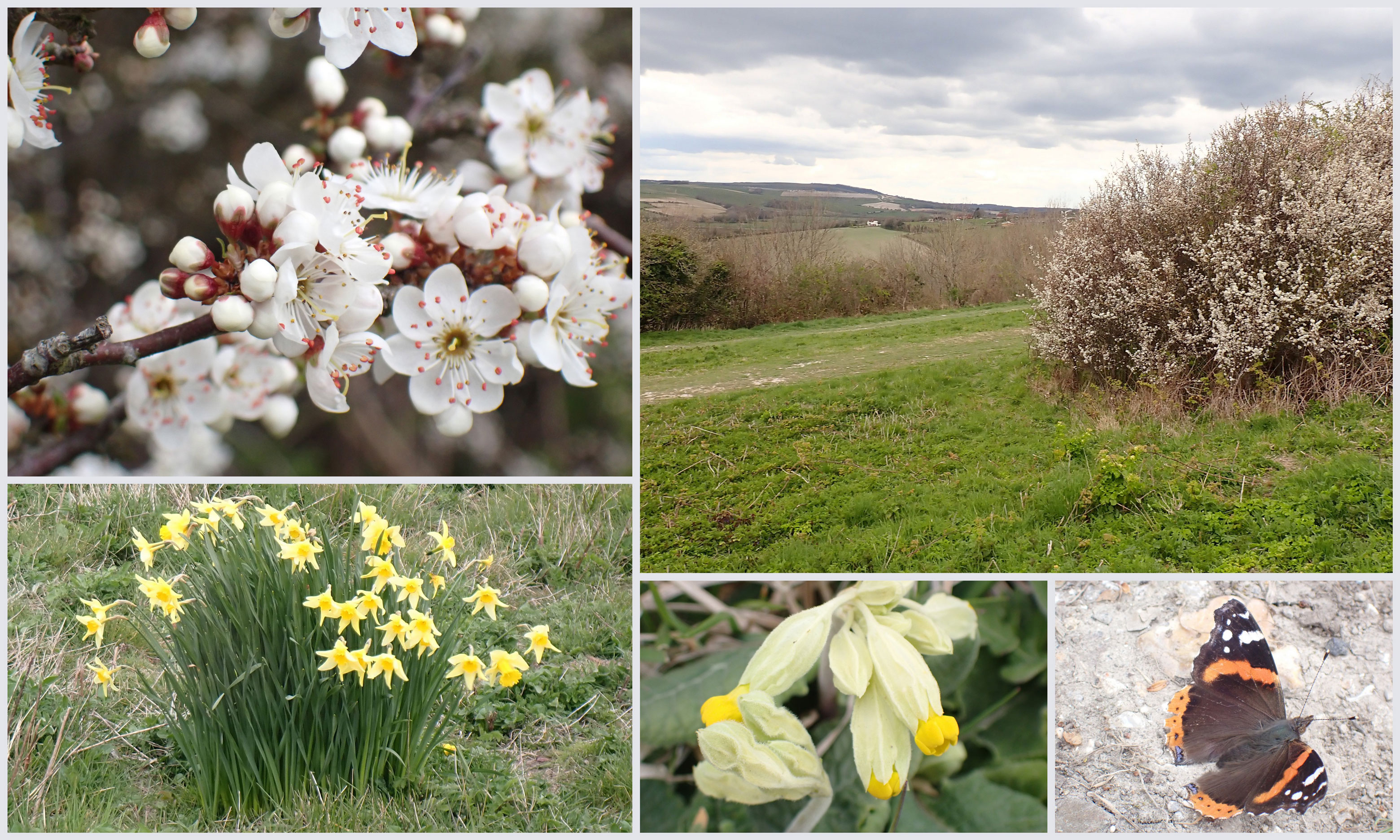 17+ SPECIES OF BUTTERFLIES DEPENDENT ON MILL HILL FOR BREEDING:
(Estimated numbers for Mill Hill Nature Reserve only are in brackets)

The other species may breed on Mill Hill, but there main breeding area will be adjoining fields or slightly further away. e.g. Small Blue (included above), Small Copper, Small Tortoiseshell, Green-veined White, Peacock, Ringlet, Small White, Large White, Comma, Holly Blue, Orange Tip. (=10). There are huge variances each year for most species.

The following have not been positively identified (because of ID difficulties):  Essex Skipper. This species is now included for a local field on the Adur Levels within 500 metres of Mill Hill.

The following was confirmed only in 2014: Dark Green Fritillary
(=32)

The next one is no longer found on Mill Hill but were there in the distant (1947) past: Grayling.
The next one has been recorded near Mill Hill in the middle distance past:  White-letter Hairstreak

The Short-tailed Blue was recorded as a single immigrant in 1956.

17 August 2009
A possible (unconfirmed) Brown Hairstreak Butterfly was spotted. A confirmed one was spotted nearby.

2017
Brown Hairstreak and Silver-spotted Skipper have been confirmed from Mill Hill. The first is notoriously difficult to spot and was probably already there. The skipper may be a new addition, but it is small and not easy to spot, and there have now been numerous sightings 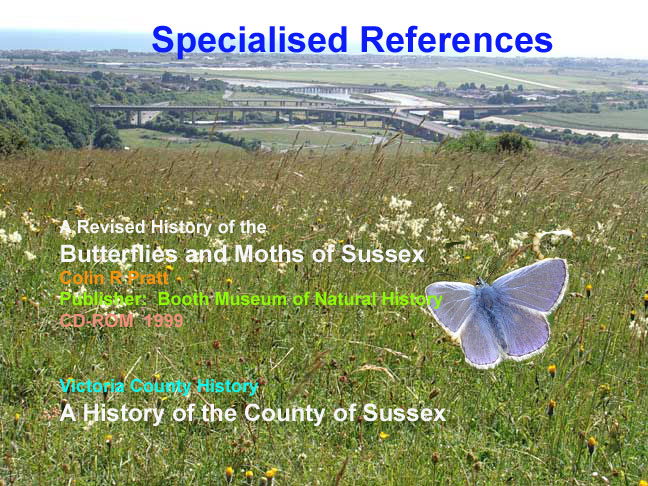