2 July 2009
A newly born (neonate) Porbeagle Shark, Lamna nasus, was caught and realeased by a young angler off the Great Bank off the east coast of Guernsey, Channel Islands. Andy Simon (father of the angler) wrote that the neonate shark weighed about 7 kg (15 lb) and was about a metre long. It was caught at 4.30 pm out from Fermain Bay.

Porbeagle Sharks usually produce two young per uterus (four in total per litter) after a long gestation. The embryos are oophagous. The mother only fertilises two eggs in each uterus but she produces copious amounts of eggs during gestation, which the developing embryos eat. The embryos have sharp teeth to tear the skin of the eggs apart.  See below image of four embryos from a Guernsey caught Porbeagle Shark.  The developing embryos have a large abdominal yolk sac, which they absorb during development.  During the colder months Guernsey fishermen catch Porbeagle Sharks occasionally. The captured adult females usually carry embryos.  It appears that Channel Island waters are a nursery ground for Porbeagle Sharks as there is evidence that Porbeagle Sharks give birth there. 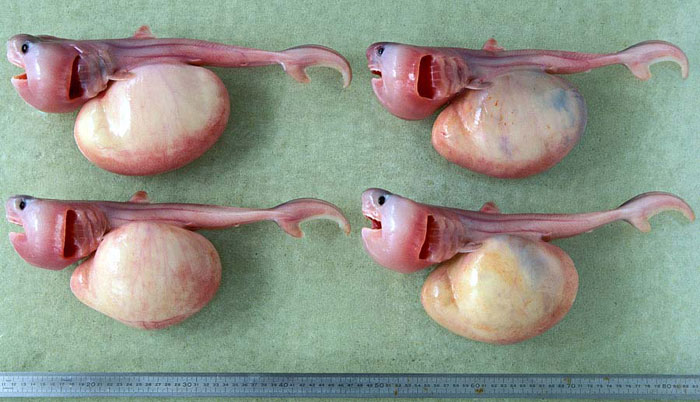 The Porbeagle Shark that produced these embryos was caught in a monofilament gill net by Richard Seager near a small rocky reef north-west of Guernsey in January 2002.