If you look closely you can spot the difference in the major claws (chelae) indicative of a sex change, probably caused by the parasitic barnacle. 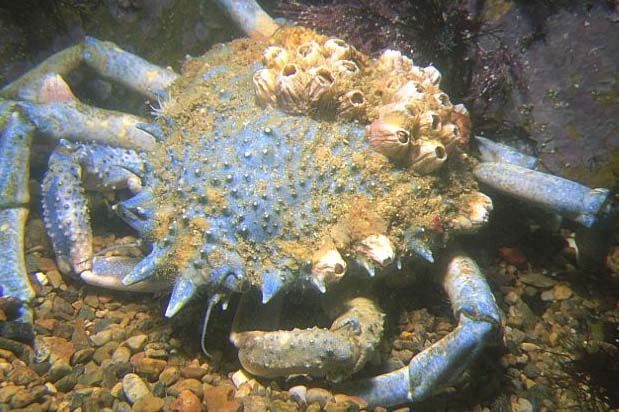 Loved the blue pictures. Another blue spider crab on display at Sea Life Centre Weymouth. Much debate about how this happens. Early experiments carried out on small lobsters indicate feeding food dyes, natural or manufactured can alter the shell colour to that of the dye. The different colour caused by the dye only becomes apparent after shedding, indicating the colour is generated whilst making new shell. This story was told to me by the guy who reared lobster fry out at Portland Bill, His name evades me for the moment.

>They called it a puffter<.

I just love that, Here's another story I have been brought up with from a youngster regarding puffters, or strangers as they are more generally called.
There is a parasite that invades the crab. During the time of its residence the crab is unable the shed its shell. If the parasite lives for a number of years it also interacts with the host crabs sex, making it change to either the opposite or a neutral shape, i.e. the claws are neither large as in male, or small as in female. The tail is neither pointed as in male or rounded as in female. The new shape is adopted when the parasite dies and the crab will immediately shed its shell. It will then adopt its new lifestyle, but who knows if it will ever breed or shed its shell again. Know doubt this story is based on fact, but where does the fact end and the fiction begin.

from  Bob Alexander  (Weymouth)
Strangers (puffters) or crabs that do not fit into the norm.
After chatting to a number of fishermen -, large brown and spider crabs, although some are found not to fit into the normal spectrum, none have been found to contain the barnacle that induces sex change. They comment, with the amount of crab landed, which amounts to tons per year per boat, abnormalities are bound to be occasionally found. This would include crabs
with more than two claws and those difficult to sex.
After visiting Copines, a local fish merchant that exports crabs and lobsters by the ton each week, looking into the holding bays, minor abnormalities caused by injury and shedding are the norm. When crabs are sorted for Marks & Spencer for instance, they expect some 50% to be rejected as not up to standard.
from  Bob Alexander  (Weymouth)

A further specimen of a blue Spider Crab was caught off the Isle of Wight. It was orange when caught and kept in captivity and after moulting in November 1998, the new shell was blue.  (from Michele).