(in the subclass Octocorallia of the Class Anthozoa)

The site is a small offshore reef surrounded by silty sand, with depths 13-16 m at high water.  There are other similar reefs nearby.  There will be some current on the ebb tide, running approximately south west, but considerably less on the flood.  The rocks are generally covered with a silty 'turf'.

Observation 2:
On the same reef, in a depth of 15 m, I came across a single pink specimen of Eunicella verrucosa, 25 cm high and around 18 cm wide.  I had run out of film by that time!  Nevertheless. the identification is certain, and I am sure that I can relocate both the reef and the Eunicella.  Do you know of any other record as far east as this?

Like most of the patch reefs in Poole Bay, this one is formed of pyrite.  Very irregular peaks, holes, gullies, shallow overhangs and small caves are the predominant structural features, though there are some open, flat areas.  The reef is approximately rectangular in plan, with the long sides (possibly 80 metres long) facing roughly East and West.  The Eunicella is on fairly open rock on the west facing side, near the bottom of the reef.  The plane of the fan is perpendicular to the flood current which runs north along this face of the reef, probably at less than half a knot maximum (based on experience of similar conditions in the Bay rather than any specific observations). Chartella sp.(a bryozoan) is abundant on the reef; Dead Mens Fingers, Alcyonium digitatum (mostly covered in a brown algal growth at this time of year) is common; Caryophillia smithii is occasional; Nemertesia antennina frequent to occasional.  The reef is regularly potted, for crab and lobster.  The rocks are covered in a low silty hydroid/bryozoan turf.  The Eunicella is around 2 metres below the deepest occurrences of any noticeable red weed.  Visibility will generally be around 4 metres during good conditions in summer, andconsiderably less in winter. so light levels are not very high.

Pink, with a hint of an orange hue (depends rather on the light, with poor light tending to emphasise the orange). 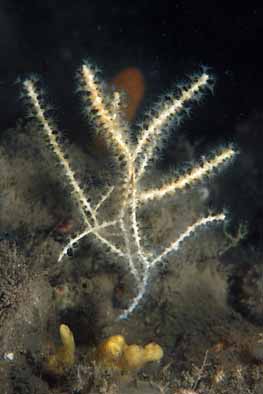