British Marine Life
Study Society
The British Marine Life Study Society (BMLSS) was conceived out of frustration of being unable to find out more information about the small fishes, crabs and other invertebrates of the rock pools around the British Isles. We identified a gap between where the popular books left off and the scientific papers began. Our first step was to invite existing organisations to produce this information and we offered to contribute. The response was decidedly discouraging inasmuch at least one reply indicated that they intended to produce this information, but not yet as they had not got the resources to do so.

Anyrate, we decided to go it alone, as we thought it would be easier to produce the information ourselves. We got a bad shock as it proved much trickier and more expensive in a lot of respects. The scope was widened to include all marine life around the British Isles and not just the organisms found between the tides. The BMLSS officially started on 6 June 1990 and the first issue of Glaucus was published and distributed on 26 September 1990. Somewhere we must have a list of the starting members, but I remember that Ron Barrett provided valuable help in the first two years. 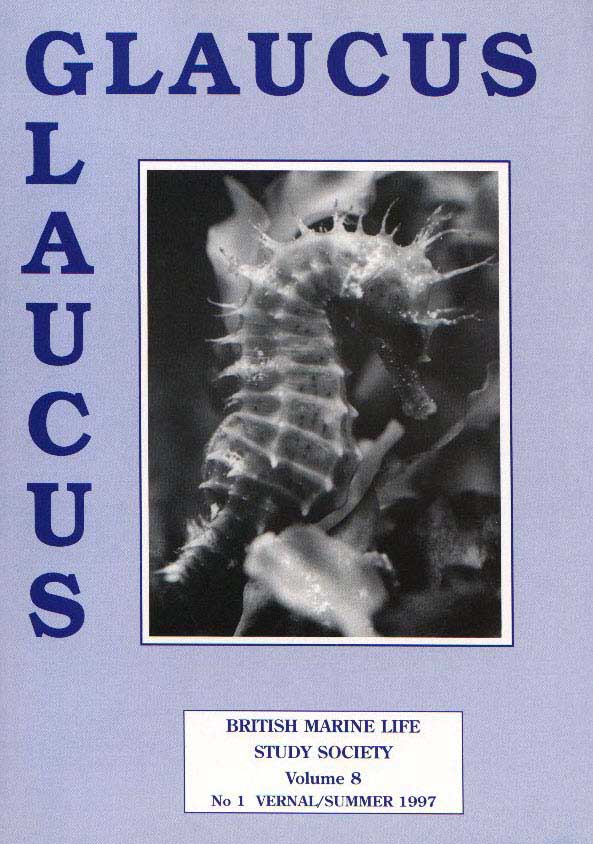 Although, we are an informal society, I thought it important that the aims and purposes were fully established at the start. We are a wildlife study society publishing information and are not a conservation or campaigning group and this is forbidden in the Constitution. The BMLSS is an Institute of Biology Affiliated Society.

In 1993 when Glaucus was properly printed, we thought that it was now worthwhile, but the standard did not improve until Jane Lilley joined and did most of the sub-editing. In those days our primitive computer did not even have a spell checker! The Shorewatch Project commenced under the current name in January 1995, and Torpedo Electronic News in August 1996. The first issue of the bi-monthly Shorewatch Newsletter was issued on 27 February 1997. Alan Pemberton started the Scottish web site in June 1996 and it was chosen as a new Scientist Web Site of the Day in November of the same year. The English web site did not commence until 1 January 1997, and has since been recommended both by Encyclopaedia Britannica and the BBC.

For the whole of its ten years the BMLSS has shown a large annual deficit. Income is almost entirely from members subscriptions and I have put in a subsidy every year. From the outset we guessed that it would hard to attract enough members so the future lies in co-operating with all other groups to achieve the aims. We believe that work of such groups like the BMLSS and the Porcupine Society are essential for biological recording in the 21st century.