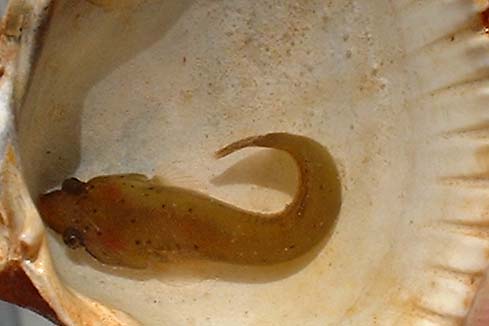 11 September 2002
The tide receded beyond the pier on Worthing beach which was rather scantily inhabited by mobile fauna of interest to the rockpooler. However, of special interest was the discovery of a young Small-headed Clingfish, Apletodon dentatus, in a shallow weedy pool south of the pier. All clingfish have a pelvic (underside) find fused into a sucker, so when the cockle shell is inverted (see the photograph aside) the tiny fish remains fastened to the shell.
A few Squat Lobsters, Galathea squamifera, were around with shoals of Sand Gobies in hundreds. First year  Blennies, Rock Gobies, Sand Smelts and Common Gobies were abundant in the shallow pools, with a a few (two seen and noted) young 5-Bearded Rockling that had attained their brown adult colours.
A Clouded Yellow Butterfly, the third occasion I have seen them this year, fluttered over the Worthing promenade, finding some garden plants planted by Worthing Borough Council.

13 August 2002
There was one large colourful Squat Lobster, Galathea squamifera, that I was unable to capture, a couple of dozen large Edible Prawns, Paleamon serratus, and surprising absence of the Hairy Crab, Pilumnus hirtellus, but hundreds of Blenny, Rock Goby, Sand Smelt and Common Goby in the shallow pools. There were scores of small Hermit Crabs in grey topshell, netted dogwhelk, winkles and dogwhelk shells. Shoals of fifty plus, totalling several hundred Sand Gobies were present in the pools to the south of the pier which were covered on bedrock weed of sufficient variety to interest the phycologist.  The Sand Goby is longer and more streamlined than the Common Goby. There was one large and intact Spiny Spider Crab near a pier support. 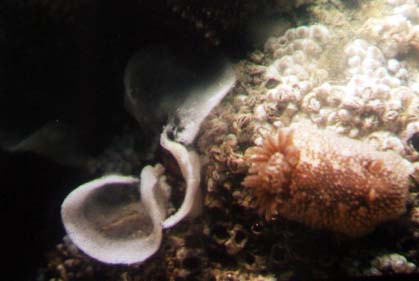 5 March 2002
On a calm day the low spring tide at Shoreham was forecasted at 1.1 metres. The tide receded to lap against the lowest of the Worthing pier supports at its lowest ebb. Fauna was not particularly special. Plumose, Beadlet and Sagartia troglodytes sea anemones were recorded. Very small Blennies (x 50+) and Rock Gobies (x 12) were under rocks. The most notable report was of the spawn of the nudibranch Onchidoris bilamellata but no adults were seen. A few Edible Crabs, Shore Crabs, Hairy Crabs and Common Hermit Crabs and porcelain crabs were normal. 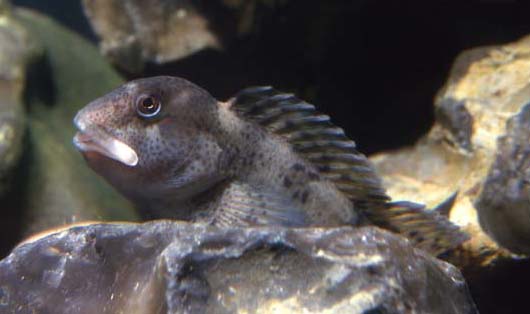 28 March 2002
The first Full Moon since the Vernal Equinox shone clear and large in the late afternoon sky. The tide went out well past the end of the pier. A pregnant 5-Bearded Rockling was amongst several species of rockpoolfish in the shallow pools. Another verification that Taurulus bubalis is commonly known as the Bullhead by an angler looking for crabs: there were several of these fish in pools, with Blennies, adult and young, smaller 5-Bearded Rocklings, and a single small Corkwing Wrasse.
A few Edible Crabs, Shore Crabs, Hairy Crabs and Common Hermit Crabs and porcelain crabs were normal. There were only a handful of Plumose Anemones on the pier supports.