For some weeks now I have been keeping two small Bass , Dicentrarchus labrax, in a 55 gallon tank along with a few Beadlet Anemones, a single large Snakelocks Anemone, two small Shore Crabs, some limpets and winkles and a selection of palamanoid prawns and crangoid shrimps.

Both fish were captured on rod and line in a small tidal overflow river near Pevensey Bay, in Sussex, using cockle as bait. The smaller of the two measures approx 4" in length, the larger about 6".  They were introduced to the tank one day apart, the smaller fish first. 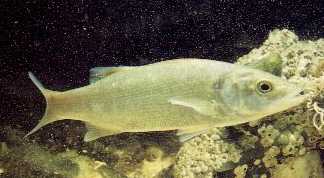 In the beginning, both fish were understandably very shy, reacting to the slightest movement outside the tank, and disappearing behind the rockwork in the tank. After three days, the larger of two began to show signs of feeding, making several feints at the prawns and shrimps which were in the tank. Day four, and both fish were seen to be actively hunting and eating the prawns, and the shyness was gone. Both fish now spent a good deal of time out in the open water in the front of the tank, cruising up and down the length of the aquarium.


Day six, and all the shrimps and prawns were gone, and I attempted to feed the fish on whole cockle and whitebait, both of which were instantly taken.  Interestingly, the whitebait was intercepted in mid water, whilst the cockle would be picked up from the tank bottom or where it had landed on the rockwork. The smaller of the two fish would, and still does, eat both foods whole, swallowing the mouthful down in one action, but the larger fish would take the food item into it's mouth and spit it out two or three times before swallowing, accomanied by a lot of chewing motion and spitting out of small particles. Both fish now eat a variety of foodstuffs, cockle, whitebait, both dead and live shrimp, prawns, mussel meat, and small pieces of whitefish bought from the fishmonger such as cod, haddock and plaice.

The larger of the two fish now shows no signs of shyness at all, and will react to my presence by the tank by bobbing up and down in the water and following me, almost like a dog begging for food.
Neither fish seems to rest in any one place for long, even at night when the tank lights are off, and seem to be constantly active, and looking for food.

Both fish have from the start shown signs of skin irritation, and often scratch their sides on the rockwork. I cannot see anything obvious, and so have not treated the fish or the tank with any chemicals. As the fish were caught in slightly brackish water, I wondered if the irritation could be sea lice?   Probably not.  AH
Both fish are showing signs of growth, probably due to the higher water temperatures in the tank than in the river from where they were captured.

Notes:
Bass growth rates.....yes, I had noticed that they grow rapidly ! They will have to be returned early in the new year at a prawn or shrimp much the same way as a cat stalks a mouse, ie, sneaking up on the creature using the rockwork as cover, and only attacking the prey at the last moment as they are detected. Dead shrimps and prawns are normally attacked as soon as they hit the water, I drop them in the tank in the outflow of the powerhead and let the current do the rest.  guess. The biggest fish is already deepening in girth, and the other is not far behind.
Prey capture...they seem to have two methods of catching live prawns and shrimps. One is outright attack, they home in on a shrimp using eyesight and go straight in, mouth wide open and gills flared. The other is more cunning...they will stalk...


Place of capture...the water in question is only a small tidal overflow called Alice's Pipe.. It is connected to the sea via a very large diameter pipe, about six feet high which runs under a road. (If you have a map of Pevensey Bay handy, look for BEACHLANDS Road, and follow it from the junction of Wallsend Road heading eastwards towards Normans Bay. The actual pipe is approx. half a mile down that road.) The pipe runs under the road, under a row of houses and thereon into the sea.

The other end of said river runs up to a sluice gate which is on the main A259 and connects to the river known as the Wallers(or Pevensey) Haven. It is only ever connected to this river when the river systems are overful and the gate is opened to drain off some of the water out of the river. The tidal side of the river is then flooded by freshwater, but not the other way around. This piece of water is about 1 mile long in TOTAL, and is always tidal, tide times are normally about half an hour after the main saltwater tide times. Many species of saltwater fish get into this river, as well as bass, there are flounders, dabs, occasionally a plaice or two, mullet and eels. Plus countless millions of crabs !

The bottom is mud....thick, grey, sticky mud, about 18" deep in places, and the whole system is littered with shopping trolleys, an old motorcycle, lumps of wood, the remains of an old boat........the usual sort of things.

For the anglers among the readers, both fish were caught on float fished cockle, using a modified 12' carbon freshwater matchfishing rod, altered by shortening the middle section by 18"(not for technical reasons...I shut it the car door !!)The reel is a Shakespeare fixed spool, 6lb. bs. line, and a size 2 carp hook. Both fish took the bait before it had chance to sink to the bottom, approx 6"-10" below surface level. I was able to see both fish take the bait.

Aquarium details
~~~~~~~~~~~~~
Tank is 50"x16"x20", and filtered by a Tunze TS1066 filterset, using one bio pot filled with floss for the removal of large debris, and two bio filters filled with Tunze BioGranovit for biological filtration. A Tunze 235D/U venturi protein skimmer is also used.  An Aquaclear 802 powerhead provides extra water movement and is connected to a timer giving a three hour on/three hour off cycle over the twenty four hour period.  No extra aeration is used.
Internal decor consists of a few large pieces of lava rock, three large pieces of chalk, and some boulders and large flints collected from the local beach. A 1/2" deep layer of coral sand and crushed cockleshell serves as a substrate. No natural plant life is grown as yet, but a few plastic plants are used.
The tank is illuminated by a 30" Triton tube for 10 hours a day, and a 24" Actinic tube for one hour before and one hour after the main lighting period.
Water parameters are: Temperature-70.7°F, SG-1.019, PH-8.1, Nitrate, nitrite and ammonia all register zero using Tetra test kits.  Water changes are made at the rate of 5gallons every two weeks using Tropic Marin salt and fresh cold tap water.
The water temperature has risen as high as 77.8°F over the recent spell of hot weather with no signs of adverse effects on the tank inhabitants. At present, no water cooler is used, but half a dozen small plastic lemonade bottles with frozen water are placed in the tank, and these are changed on a regular basis.
At present these are the only two fish in the tank, however they are shortly to be joined by a few small Corkwing wrasse. Hopefully the wrasse will be safe from the attentions of the bass, as there are a myriad of hiding places in the tank's decor.

Alice's Pipe
Apparently the piece of water in question is purely a storm drain overflow for the river known as Pevensey Haven, and unnamed. It wasn't thought worthy of a name when it was dug by Southern Water.
The outlet into the sea was called after Alice by local shore fishermen, who needed a name to put to into print after an extremely large bass was caught there a few years ago . Alice lived nearby, I'm told.
So, there you have it....the last word on our piece of water. Which shall be called, by us anyway, Alice's pipe !!