22 September 2015
A huge Atlantic Halibut, Hippoglossus hippoglossus, was caught in Andfjorden, north Norway, by Reed Marianne, which weighed in at 270 kg (595 lb). The report did not give the length but the photograph showed it to be over 3 metres in length. It was caught at a depth of 31 metres. This may be a new record weight Halibut caught on rod and line.

World Sea Fishing Forum
7 June 2006
The largest* Atlantic Halibut, Hippoglossus hippoglossus, ever recorded was caught and landed by professional net fisherman Rolf Larsen (62 years old), at Stamsund, Lofoten, Norway (within the Arctic Circle but with seas warmed by the Gulf Stream). This massive fish weighed 282 kg and would have probably weighed 290 kg when first caught. The difference was because of the loss of blood after capture. Its total length was 262 cm. The fish was sold for display.
Report by Kent Andersson
Fiske-Kent / American Fisheries Society
Nettavision News Report (with a photograph)

(* My current information has the previous largest as 266 kg and 365 cm long. This length appears to be wrong.)


The World Angling Record for Halibut is from Norwegian seas. The size is not known at present but it is in excess of the previous USA record of 115.8 kg (255 lb). From the northern Norwegian commercial fisheries, Halibut have been reported up to a length of almost 4 metres and weights in excess of 300 kg.

A 101 kg (224 lb) Halibut was caught commercially off Iceland and brought into Grimsby and bought by Elite Foods at Newhaven, Sussex. This is from the Evening Argus (4 July 2001)  which has the world record weight at 354 kg (780 lb). I do not have a source for this record.


The largest H. hippoglossus caught on rod and line from a boat in Norway weighed 161.2 kg and was caught at Valevågsbråtet the 20th of October 1997. I don't know the commercial record, but the biggest Hippoglossus hippoglossus caught on Iceland (I think the biggest ever caught) was 3.65 m and weighed 266 kg. Sorry but I dont have the year and date, but I dont think it was caught on rod and line!!!
Try this site: http://home.c2i.net/cappleby/rekorder.html It have all the official Norwegian records with rod and line. The site is in Norwegian but the headings translated are:
Norwegian name - Scientific name - Norwegian record in kg - Place and date - World record in kg - Place and date

Information of largest fish from Norway and Iceland was provided by Pål Enger. 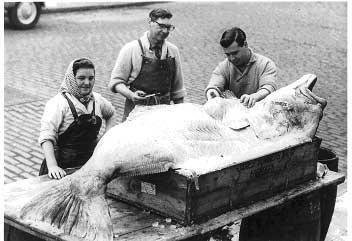 I was looking at your records for Halibut and noted the following:

This rings a bell, loudly.  The fishing boat was the "Royal Lincs"  named after the Royal Lincolnshire Regiment. Grimsby was her home port. As a student, in September of 1957, I had taken a month-long trip on the "Royal Lincs" off to the north of Norway and into the Barents Sea. As far as I recall the fish was caught off Northern Norway, the following trip likely in October. It made the national newspapers.  The reported weight I remember well, was 36½ stone. which translates to 511 lb or  232 kg.  That would be gutted weight, although the fish had the head on when it was weighed.

Reason for my web search was that I am currently doing a small article on halibut culture, which is likely to become important here in Nova Scotia.

Torstein Halstensen has spent years tagging Halibut from several areas in the southern part of Norway. He spend most of his spare time in a boat, fishing for Halibut. By tagging, releasing and recapturing the fish he has added new knowledge about the migration pattern and behavior of Halibut from different areas.

The Halibut shown on this page (below) is a male which proportions are breaking the former record. This male was 1.75 meters long, weighing 75-80 kg.