The sparseness of the Sussex shores can be contrasted by the exciting finds made by Jon Makeham at Hannafore Beach, Looe. This particular shore is really one of the richest I have heard of. Even in winter the shore zone produces the most unusual selection of rare and uncommon species amongst the small fish that will not arrive on to the Sussex coast until March. A full report will be included in the next issue of Glaucus.

Aftermath of Storms
by Jon Makeham

We were able to visit the upper part of Hannafore Beach on Friday 10 January 1998 in the immediate aftermath of the storms, and to mange a couple of hours rockpooling further down the reef during during the low spring tide (which was not as low as predicted, probably due to the sustained winds).

The foreshore and strandline  were strewn with an extraordinary number of empty mollusc shells of many species, a rough count putting the density at several thousand per square metre. Large numbers (several hundred) of By-the-Wind Sailors, Velella velella, were cast up, both as complete dead specimens and as dried sails, together with a couple of Portuguese Man-o'War, Physalia physalis, which were badly damaged and without their stinging tentacles. A prolonged search did not reveal any specimens of the pelagic snail Janthina janthina which preys on these colonial hydroids (both Velella and Physalia are not true jellyfish). 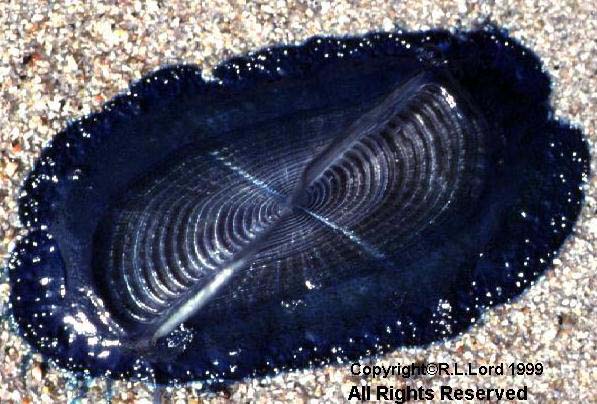 Amongst the natural debris were several dozen large dead crabs of species normally found at low water mark and below. These included adult Shore Crabs, Carcinus maenas, Velvet Swimming Crabs, Necora puber, and the Furrowed Crab, Xantho incisus. The largest crabs were specimens of the Edible Crab, Cancer pagurus, measuring up to 25 cm across the carapace.

There was some evidence of oil deposits on the foreshore, and although this was not extensive, two young Guillemots were found wandering along the beach, waterlogged and lightly oiled. One of the birds survived to be cleaned, but died before drying out.

Fish on the Lower Shore

An investigation of the lower reaches of the reef showed little ill-effects from the storms on the itinerant wildlife, although some silting up of the more easterly pools had occurred. The local fauna does not desert this beach in winter. Amongst the common shore fish of the Blenny, Lipophrys pholis, Rock Goby, Gobius paganellus, Two-spot Goby, Gobiusculus flavescens, Long-spined Bullhead, Taurulus bubalis, 5-Bearded Rockling, Ciliata mustela, and Worm Pipefish, Nerophis lumbriciformis, there were some of the less common fish like both species of the small orange-brown fishes called by the strange name of Sea Snails, both Liparis liparis and Liparis montagui, as well as the Small-headed Clingfish, Apletodondentatus, and a full grown specimen of the 3-Bearded Rockling, Gaidropsarus vulgaris. 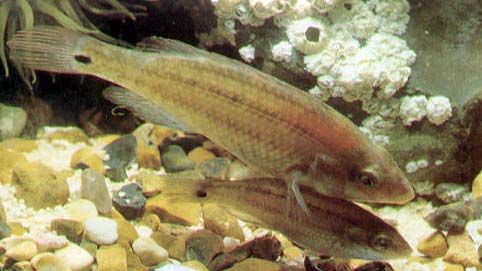 Two species of wrasse, the Corkwing, Crenilabrus melops and the Ballan Wrasse, Labrus bergylta were present in small numbers. An unusual find on this shore was a Butterfish, Pholisgunnellus, almost transparent, without the characteristic eye spots.

A sea slug, Tylodina perversa, was found at Hannafore, Looe in December 1996 by Jon Makeham. This is the first record in the British Isles of this Mediterranean species. The specimen description has satisfied the experts. In March 1997, Jon Makeham discovered a further specimen. More information available. Please request by EMail. 14 November 2001
Two specimens of the Straight-nosed Pipefish, Nerophis ophidion, were discovered on the south Cornish shore of Hannafore Beach, Looe on the low spring tides. These pipefish are resident large (12 cm) pipefishes around the southern coast of Britain, and are probably rarely recorded on a few shores rather than being a rare species of this small elongated fish.
Full Report
Looe (Discussion on discoveries)
CD-ROM (Discussion on discoveries)