Mackerel belong to the large family of marine fishes known as the Scombridae. It is one of the smaller fishes of the family that includes the tunnies and the well known Skipjack Tuna. All members are streamlined predatory fish, supremely designed to cleave through water, with the absolute minimum of protuberances to offer resistance to their swift passage. Its speed can reach 100 metres in 11 seconds (20.336 mph).

The Atlantic Mackerel is by far the commonest of the 10 species of the family that have been caught in British waters. It is extremely common in huge shoals migrating towards the coast to feed on small fish and prawns during the summer. Overfishing has reduced the numbers in parts of the North Sea. 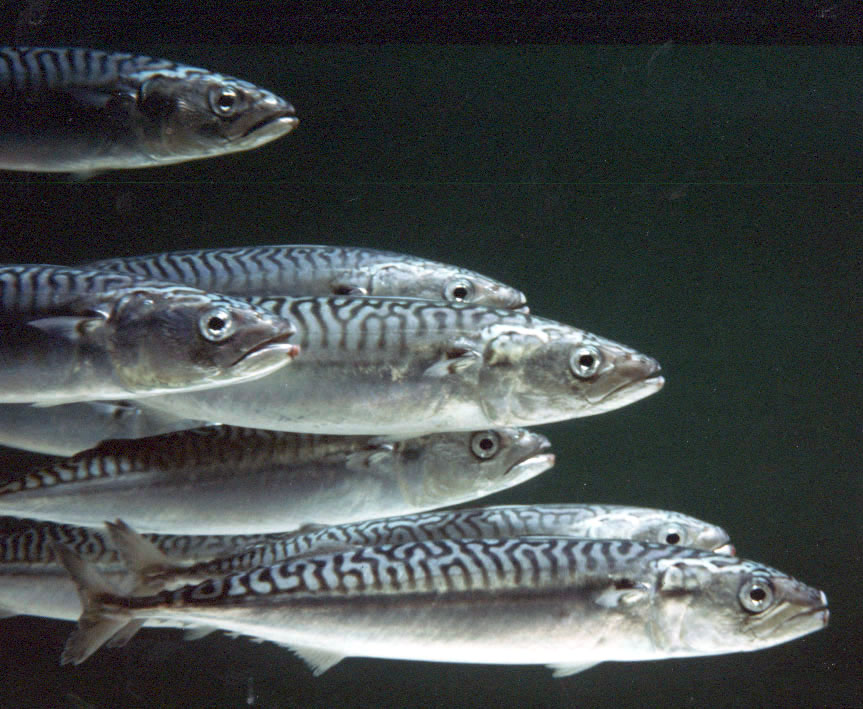 Mackerel are found off all British coasts, in the Mediterranean Sea, and on the American side of the north Atlantic.

Two distinct stocks have been identified in British waters, one spawning in the North Sea, and the other spawning to the west of the British Isles.

At spawning time, the eggs and sperm of the mackerel are released into the sea. Mackerel can release up to one million eggs.  The egg is just over 1 mm long, with an amber oil globule that keeps it floating in the pelagic surface waters. Surviving larvae at 3 mm long will feed on copepods. By the first autumn, the North Sea population of Mackerel will attain a length of 15 cm, reaching 25 cm after one year.

Stomach content analysis of adult mackerel sampled in Loch Ewe and the Minch (Scottish seas) during the summer months indicates a variety of prey including small fish such as sand-eels, Ammodytes spp., small gadoids (cod family), and clupeoids (herrings), as well as filter feeding for small crustaceans such as Euphausids. 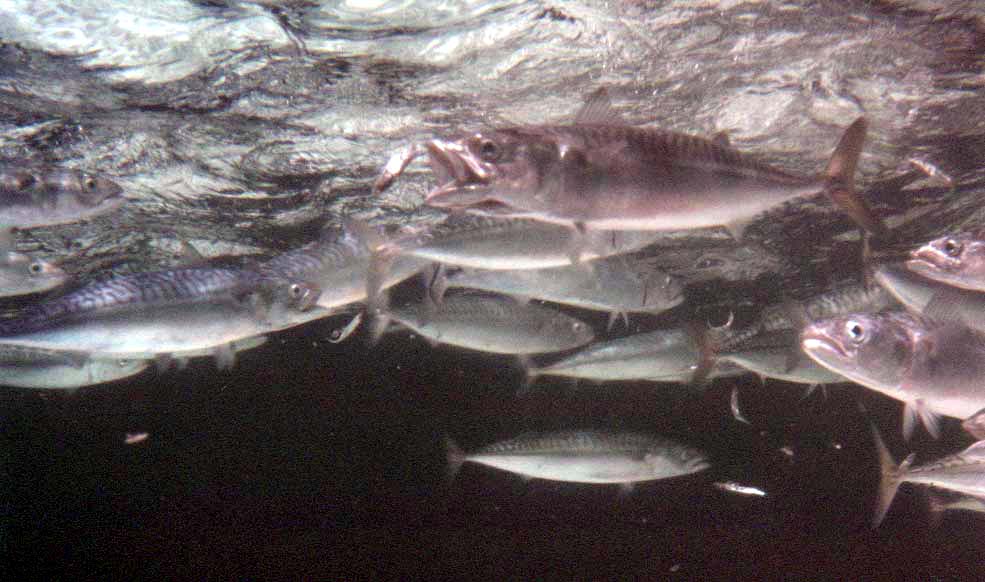 In Sussex waters, mackerel are known to feed on juvenile prawns of the species Palaemon serratus, about 10 mm long, in large numbers.

Feeding ceases when the mackerel return to deeper water during the winter.

Mackerel are long-lived fish, if they are not caughty, and fish of over 25 years old have been caught in the North Sea.

The largest Atlantic Mackerel ever caught on rod and line was from deep water off the western Swedish coast (Svaberget) and weighed 3.074 kg (6 lb 13 oz), (1995).

7 February 1998:  Mackerel, Scomber scombrus, are being caught in commercial numbers off Brighton, Sussex. These fish are normally caught only in summer. Fishermen believe that the warm water is the reason for their occurrence, although in the coldest month of the year the sea temperature was measured at 7oC which is about normal for February. Report by Peter Talbot-Elsden.
Recommended reading:

The Mackerel by Stephen Lockwood
Dr Lockwood took over the UK's mackerel research programme at a critical time and this enables him to give a unique review of events which led to the revival of the English mackerel fishery in the 70s.

Why the interest in mackerel?; The mackerel and where it is found; Early development of the European mackerel fisheries; Mackerel fisheries since the mid-1960s; Stocks and migrations; Reproduction and early life-history; Age, growth and maturity; How big is the resource?; When, where and how mutch should we catch?; Scientific advice and fisheries management; Conflicts of interest; Discarding and conservation; An international management measure; Catch limitation; Recent results and stock prognosis.