The Tope is the largest of our inshore (NE Atlantic) native sharks.  Staying mainly in shallow waters around the British coast all year. The Tope has a rather pointed snout, flatted and long, the nostrils have only a small flap partly covering them.  The spiracle is well developed.  It has typical shark like cutting teeth, they are sharply pointed, laterally oblique, with a row of large serrations, on the hind side.  In the centre of the jaw the serrations are either side of the main cusp. The uniform dorsal grey colour, (greyish or light brown, lighter on the belly, no white spots on sides).

The Tope are rather solitary shallow water sharks found mainly on or near the bottom in up to 50 metres over gravel or sand. Their food consists mostly of fish, chiefly gadoids (whiting, pouting and codling) and flatfishes (dabs, soles and flounder), plus other items such as dragonets, crustaceans and echinoderms.

The Tope matures at about ten years of age. It has been suggested that they produce young every 2 years, with a gestation period of 1 year, this could be why mature females are caught during spring with out young.  Being viviparous, gives birth to live young, in the warmer summer months; they measure up to 15 inches (40cms) in length, but this and the brood size depends on the length of the mother.  Once matured the small mother have brood size up to 20 pups, the very large mother (in-pup) up to nearly 80lb in weight has large young and brood sizes up to 30/40 pups).

The small tope (dog-tope) stay close inshore, some times in only a few feet of water.  Packs of dog-tope have been seen chasing shoals of small fish and trapping them against a harbour walls, or driving them on to a rocky shore.

The mature Tope remain within British waters throughout the year but a few make long migrations.  With the tagging since mid-1974 to 1980 that took place off the N.W. Scotland, around the Is. Off Mull, and the Mull of Galloway, finding that more males stay offshore, and more females inshore. Tagged showed that a few made long southward migrations turning up off the Azores, and one reached Canary Is. a journey of 3000 km after 268 days, another travelled 3200 km to Algeria, in the Mediterranean after 9 years. The majority were re-caught around the British coast, one in the English channel off Hastings after being at liberty for about 12 years.

The first results of the tagging does not show the Tope making a southward mass migration in autumn occurs.  The only evidence of a southward migration from cooler northern waters in the autumn, was of pregnant females moving south perhaps to their pupping areas for the following spring/summer in warmer waters. No evidence supporting their breeding in British waters.  As rarely any newly born pups, or fish of less than 90 cm have been recorded in British waters.


Tope grow to 2 metres long, and weight 45 kg, are thought to be slow growing and long lived, tagging data seem to support this. With 2 sharks after 10 years weighed 11-18 kg more than when released (the first weight could be low because it was gutted weight). One female increased weight by 1.6 kg in 9 months, another sexually immature female increased weight by 4.3 kg in 13 months. It could be that immature females put on weight more quickly than mature ones because food intake goes on growth rather than to reproduction.  Thus females would take over 20 years to attain a weight of 27 kg.  One male increased by 1.4 kg in just over 2 years.

Tope reported catches by mainly boat anglers for the part 3 years has gone up and down.  There have been some very large specimens caught and from different areas.

The above diagram shows that the west coast of  Wales has the best tope catch average numbers over the past 3 years and the south coast is second but with some larger specimens.

We think of the Tope, Galeorhinus galeus, as a mainly British shark but it has a world wide distribution.  Commonly known as the Soupfin shark and widespread to west coast of North America, east coast of South America, north east Atlantic, South Africa, southern Australia and New Zealand.  Found on the continental slopes in temperate waters. It can migrate vast distances, tagged sharks from England have travelled to Iceland (1,525 miles) and the Canary Isles (1,570 miles). Tagged sharks from California have been recaptured off British Columbia (1,000 miles).

UK tope fishing is widespread but little is known as fishermen never report shark catches automatically to anyone.  However Dr Philip Vas and colleague Teresa Thorpe have been studying the catches brought a shore at Port Newlyn, Cornwall which is the most  western major port in southern England.  For the past few years and have gone out with  the deep water fishing boats off the continental shelf some times for as long as 7 days.  During the study a total of 59 tope were caught in gill net set at least  60 metres of water.  Of these sharks 59% were males between 44 to 148 cm TL, while females ranged from 81 to 157 cm TL.  There was a most noticeable seasonal change  in the sex ratio of the landings, with males becoming more abundant than females later in the year 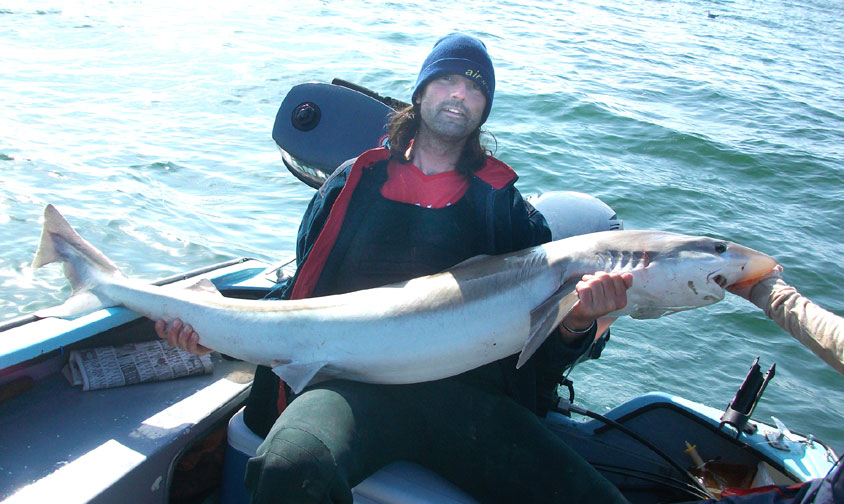 How much does this Tope weigh?

I recently caught a large Tope, Galeorhinus galeus, from my own boat while fishing in Wigtown Bay, south west Scotland. She pulled my 55 lb salter scales dead when I tried to weigh her in the sling, her measurements were 175 cm (69 inches) in length and just over 82 cm (32 inches) in girth. I've been looking at quite a few pictures of Tope caught and think that she looks a rather substantial weight, although the pictures do not do her justice.

The weight of this shark is estimated at 36 kg.